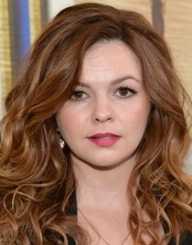 Amber Rose Tamblyn is a popular and award-winning actress, film director, poet, and author. Born on May 14, 1983, she came into limelight with her role as Emily Quartermaine in the soap opera General Hospital. With her performance, he had a role in the prime time series, Joan of Arcadia, playing Joan Girardi. This role gained her a Golden Globe and Primetime Emmy nominations. Tamblyn has also featured in films like Two and a Half Man, 127 House, The Sisterhood of the Traveling Pants, The Grudge 2, and The Ring. She is a co-founder of Now Poetry Society dedicated to poetry writing. She has also published poetry books including The Loneliest.

Amber Tamblyn was born on May 14, 1983, in Santa Monica, California to Ruse Tamblyn and Bonnie Murray. She was born into a family of entertainers. Her father was an actor, singer and dancer and her mother a singer, teacher and artist. Her paternal grandfather is actor Eddie Tamblyn and uncle Larry Tamblyn, a former keyboardist for the rock band The Standells.

Amber Tamblyn started her education at the Santa Monica Alternative School House. She said the school was"very unorthodox, no letter grades."While there, she took part in school plays and played Pippi Longstocking at age 10. This was when her father’s agent Sharon Debord who attended the play as a family friend discovered her. Debord was able to convince Ruse to allow Tamblyn attend an audition.

Amber Tamblyn started her professional acting career at in 1995 in the soap opera, General Hospital, playing the role of Emily Bowen (later Emily Quartermaine). She played that role until 2001. After General Hospital, she had a starring role in Twilight Zone series’ episode Evergreen on UPN. It was in 2003 that she had a breakthrough role as she played Joan Girardi in the CBS’s drama series Joan of Arcadia. She was a teenager who God frequently visited in the form of a dog walker. She played that role until 2005. Tamblyn has also played a role in Buffer the Vampire Slayer, Babylon Field, Moonlight, and the Unusuals.

Starting with television, Amber Tamblyn went into film acting by playing a small role in her movies: Rebellious and Johnny Mysto: Boy Wizard. In 1995, she appeared featured in Live Nude Girls. Tamblyn had a significant film role in The Sisterhood of the Travelling Pants in 2005. She reprised the role in the sequel The Sisterhood of the Travelling Pants 2 in 2008. In 2002, Tamblyn starred in the horror film The Ring and followed it with The Grudges 2 in 2006. The film was a hit at the North American box office. Her role in Stephanie Delay won the Bronze Leopard at the Locarno International Film Festival in 2010.

Amber Tamblyn has also appeared in films like The Russel Girl, 2008, Spring Breakdown, 2009 which also featured Parker Posey, Rachel Dratch, and Amy Poehler. In 2010, she appeared in Main Street with Patricia Clarkson, Orlando Bloom, and Colin Firth. Her other films include 127 Hours, 3 Night in the Desert and Girlfriend’s Day.

Career as an Author

Aside from acting Amber Tamblyn is also a poet and take delight in it. She has published two poetry chapbooks and has been involved in a poetry reading in venues like California. In 2005, she published 300 copies of the poem book The Loneliest, taking inspiration from the music of Thelonious Monk. The book also contained haiku poetry written by her and other collections by George Herms. That same year, her first book of poems titled Free Stallion was published by Simon& Schuster Children’s Publishing. Tamblyn was the co-founder of Write Now Poetry Society in 2007. The society is committed to writing unique and quality poetry content. She has been reviewing books of poetry for Bust Magazine since 2011.

Amber Tamblyn is married to actor and comedian David Cross. The two engaged in 2001 and married in 2012. They welcomed their first child Marlow Alice Cross in 2017.