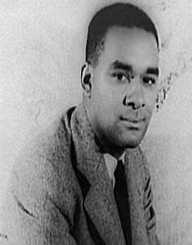 Richard Wright was an American novelist. He wrote novels, short stories, poems, and non-fiction. The theme of his writing was about the difficulties the African Americans faced, such as racial discrimination, etc.

Richard Nathaniel Wright was born on September 4, 1908, at a Plantation, Roxie, Natchez, Mississippi. He was born to the couple Nathan Wright and Ella. His parents were born free while their grandparents were slaves but got freedom after the US Civil War. His paternal grandfather and maternal grandfather had served in the army.

His father left the family when Richard was six years of age. During 1916, Ella, Richard, and his brother relocated to Elaine, Arkansas to live under the care of Ella’s sister Maggie and her husband, Silas Hoskins.

A white man killed Silas Hoskins, and the Wrights had to run away from Elaine, Arkansas. Ella suffered a stroke, and Richard lived with another uncle for a short time. Richard again shifted to Jackson, Mississippi, with his mother to live with his maternal grandmother. He lived here from 1920 to 1925.

Richard Wright joined the Jim Hill public school. He was upgraded to 6th grade after two weeks. His grandparents insisted that Richard pray to God. This childhood conflict had a significant influence on Richard’s attitude towards religion.

In 1923, he attained highest academic standards in school and a junior high of Smith Robertson Junior High School and was chosen to give the valedictory address at the graduation. He refused to listen to the Principal’s advice to deliver the speech prepared by the latter. Instead, Richard delivered his prepared speech.

Richard Wright elected to study mathematics, English and history at the Lanier High School meant for black students in Jackson. Unfortunately, he had to discontinue the studies and start doing odd jobs to maintain the family.

He shifted to Memphis, Tennessee, in November 1925 to study at Howe Institute. In 1926, he brought his mother and his brother to live with him. Shortly afterwards, Richards decided to move to Chicago and join the Great Migration, when a mass exodus of blacks to northern and mid-western took place.

The experiences he gained as a young boy had an ever-lasting impression on the racial system in America.

Richard Wright and his family relocated to Chicago in 1927 and worked as a postal clerk. During his spare time, he studied the writings of great authors and their style of writing. Richard lost his job during the economic crisis.

He started attending the lectures of journalist and activist John Reed Club in 1932. Richard became a member of the Communist Party in 1933. As an avant grade poet, he wrote many revolutionary poems in the periodicals the new Masses and the left-wing.

There were many critical remarks against him both by white and black. However, Richard Wright had to abandon his approach of writing as he had to find some job to provide for his mother and brother. He expressed his views in a fiction book entitled ‘Black Boy.’There was the violent reaction when he tried to participate in the 1936 May Day celebrations.

Richard Wright shifted to New York in 1937 where he got acquainted with some members of the Communist Party. He wrote many articles such as New York Panorama in 1938, became editor of Daily Worker, a Communist journal. He wrote more than 200 articles for the Daily Worker.

These articles helped Richard to get a friend in Ralph Ellison. They remained friends for many years. He got the first prize of $500 of Story journal for his story “Fire and Cloud.” The publisher, the Harper, agreed to publish Richard’s stories as a book.

In 1938, Richard Wright published a group of four stories under the caption ‘Uncle Tom’sChildren.’The theme of the stories was on lynching in the South. This book established a firm relation with the Communist Party and improved his financial status as well. Richard was taken on the editorial board of New Masses. Given his improved financial stability, Richard moved to Harlem. Richard wrote a novel, Native Son, which was published in 1940.

Richard was awarded the Guggenheim Fellowship which supported him to finish his novel, Native Son. He stayed in a room with his friends Herbert and Jane Newton on rent in New York. His book, Native Son, was selected as Book of the Month Club as a first African-American writer.

The reviews of the book, Native Son, were not in favour of Richard. In 1940, he travelled to Chicago to do some research on the folk history of blacks.

Richard Wright collaborated with the playwright, Paul Green to make a dramatic adaptation of Native Son. In 1941, Richard was awarded the Spingarn Medal of the NAACP for his accomplishment. ‘Native Son’ was shown on Broadway in March 1941. Richard published his book, Twelve Million Black Voices: A Folk History of the Negro in the United States in October 1941.

He received many accolades.

His controversial book, Black Boy, described the life of the author in the early years. Another book by Richard, American Hunger, was published posthumously in 1977.

Richard Wright, after a brief stay in Quebec, Canada, moved to Paris in 1946 as a permanent American expatriate. Richard made many friends like Jean-Paul Sartre and Albert Camus. He continued to write his novels.

He obtained his French citizenship in 1947 and travelled through Europe, Asia, and Africa and continued his writings. In 1950 Richard featured in a movie version of Native Son.

Richard Wright married Dhimah Rose Meidman, a dance teacher with Russian Jewish lineage in 1939. The marriage broke in a year.

Richard died of a heart attack in Paris on November 28, 1960, at the age of 52. He was cremated in Le Pere Lachaise Cemetery. It was suspected that Richard had been killed.

Richard Wright received many awards and honours: The Spingarn Medal (1941), Guggenheim Fellowship (1939), Story Magazine Award (1938), and so on

He was inducted into Chicago Literary Hall of Fame.