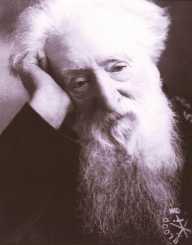 A British Methodist crusading preacher and humanitarian, William Booth, is widely famous as the founder of a quasi-military structured Christian Organization for evangelical and charitable work around the world.

Due to his efforts, this organization spread from London, England to many parts of the world. It later had its name changed to the Salvation Army.Booth was not only its founder but also its first General from the year 1878 to 1912. Today, Salvation Army is still one of the major distributors of humanitarian aid across the world.

William Booth was born on 10th April 1829 near Nottingham, England, to Mr. Samuel Booth and his second wife Mrs. Mary Moss who were both from Derbyshire. His siblings included an elder brother, Henry, and three sisters namely, Emma, Ann, and Mary.

His father was from a poor background and worked tirelessly trying to acquire riches, which eventually he was able to get.Ironically, his parents were not religious and lived without God, just working for money.

William Booth went to school as a child. At the age of 13 in 1842, however, his father, who was still poor, could no longer raise funds enough to pay his school fees, so he was sent to work for Francis Eames, a pawnbroker (shylock) who had a shop in the weakest part of Nottingham as an apprentice.

He worked there against his wish of getting an education.Through this work, Booth got aware of the plight of the poor, and he developed a strong change in his belief. By this time, he had joined Broad Street Wesley Chapel.

Consequently, he started preaching on the streets on behalf of a Methodist chapel at the age of 15, alongside his fellow believers, also having been encouraged by Reverend David Greenbury. He preached for the first time along Kid Street. His father died the same year he started working with the shylock.

William Booth apprenticeship ended in 1848, and he became jobless. For the next one year, Booth walked around looking for a job but was unsuccessful. As a result, he moved to London, and for the second time, he got a job with yet another pawnbroker.

William Booth worked for one year after which he left and started lay preaching. Because of the small preaching work that came his way, he resigned as a lay preacher and, again, started evangelizing on the streets.

Although his education had ended early at the age of thirteen, Booth gradually learned from other preachers and greatly improved his writing and reading.

The Salvation Army with its leader’stitle changing to General Booth. The creation of this kind of organizational style was influenced by the people’s respect for the Military during that time, and it was used in various organizations, not just the Salvation Army.  In its early years, the Army encountered frequent opposition regarding its methods and principles.

William Booth drew both his basic practices and beliefs from the model set by John Wesley (1703-1791) who had founded Methodism a century earlier. John Wesley’s beliefs never insisted on acquiring official religious education but rather, insisted on personal acceptance of Jesus Christ as one’s Savior as the only way to escape eternal suffering.

This freely offered opportunity for Christ’s acceptance was, however, ignored by people living in the industrial towns who constantly practiced immoral behavior. Booth, alongside other preachers, therefore, tried to reach the criminals, drunk and ignorant in the society, offering them a chance to save their souls.

In the year 2002, William Booth was named, in a BBC poll, among the top one hundred Greatest Britons. Besides, he was given the Freedom of the Cities of London and Nottingham, upon his return from the Holy Land having visited many sites of Biblical significance.

William Booth also received an honorary Doctorate of Civil Law from Oxford University. This is, however, just one of the several suchhonorsthat came his way.

On July 16th, 1855, has become an evangelist, Booth married Catherine Mumford, and together, they were blessed with eight children, including Bramwell Booth his first born who later succeeded him. Catherine was an intelligent and determined woman he met in the chapel he earlier joined in Clapton.

His wife, however, died of cancer in 1890 and she left a large void in his life. In the same year, he wrote the famous book titled, In Darkness England and the Way Out.

William Booth died on 20th August 1912 in Hadley Wood; London, England just three days after the War Cry reported that the general was sick. Coincidentally, he died after a terrific thunder storm, just as it had happened 22 years earlier when his wife died.

His body was then buried at the Congress Hall, Clapton and his older son Bramwell took over as the new general.