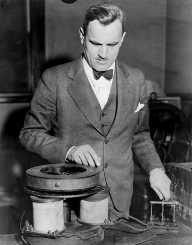 Charles Glover Barkla was a prominent experimental physicist from England who won the Nobel Prize in 1917.His field of work involved the study of Roentgen rays (X-rays) and later X-ray spectroscopy.

Glover Barkla was born on June 7, 1877, in Widnes, England.  His star sign was Gemini. His father John Martin Barkla was a secretary for the Atlas Chemical Company. His mother, Sarah Glover, came from a humble background.

Glover Barkla was an extremely gifted child when it came to studies. He impressed his teachers while at school with his incredible skills in Math.

Glover Barkla was enrolled in the Liverpool Institute. He won multiple scholarships to get there. He chose to pursue Physics under the guidance of Sir Oliver Lodge, a world-famous physicist. Glover Barkla earned a research fellowship in 1899, and it took him to Trinity College where he was to work in the Cavendish Laboratory. This shift also brought him in contact with the famous Physicist, Sir J.J. Thompson.

Glover Barkla spent about two years at the Trinity college working on finding the velocity of EM waves through different materials. Then he shifted to King’s College, Cambridge. While studying there, he also sang in a chapel choir and was received very well by the audience who were charmed by his baritone voice.  Glover Barkla received his Master’s degree in 1907.

Glover Barkla started as an assistant lecturer at the University of Liverpool. He worked with X-rays during this time and with his team, figured out the number of electrons in the carbon atom. Glover Barkla prowess with the concepts of electricity soon helped him become a Physics lecturer in an advanced electricity course. By 1911, Barkla had developed enough reputation for himself as a physicist to be respected internationally.

Glover Barkla shifted to Edinburgh University in 1913 to work as a professor. He continued working at this job for the remainder of his life. By this time he had already developed the entire set of laws that form the basis of modern day spectroscopy. Barkley's career-defining contribution was the discovery that each atom has a characteristic spectrum unaffected by external factors such as temperature.

After 1916, he became reclusive of the scientific community and focused his attention more towards teaching philosophy.

In 1917, Glover Barkla won the Nobel Prize for discovering that the X-ray spectrum of an element is its characteristic property. He also won the Hughes medal for his work in the same field.

Glover Barkla was married to Mary Esther Cowell in 1907. The couple produced two sons and a daughter. His youngest child was Flt. Lt. Michael Barkla who took part & died in the World War II in 1943. He was extremely religious and believed his work was the will of God.

The lunar crater Glover Barkla has been named in his honor.