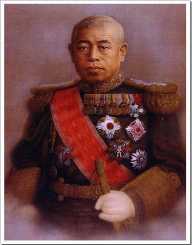 Isoroku Takano was born 4th April 1884. He was born to Sadayoshi and Mineko Takano. He was born in Nagaoka, which is in the Niigata Prefecture, Japan, and was one of seven children. His father was a school teacher but was also a samurai of the Nagaoka Domain.

Isoroku Yamamoto was adopted by a wealthy family and was able to attend the best schools in Japan for his education. This culminated in studying at the Japanese Naval Academy, Etajima, from which he graduated in 1904.

In 1904, upon graduating from the Naval Academy,  Isoroku Yamamoto was stationed on one of the Japanese naval ships, serving during the Russo-Japanese War. He was wounded during the battle, and in 1914, he returned to study at the Naval Staff College. He graduated in 1916, with the rank of Lieutenant Commander. From 1919 to 1921, Isoroku Yamamoto studied in the U.S. at Harvard University. He was also posted in Washington D.C. as a naval attaché. He learned to speak fluent English while in the U.S., as well as being able to study American culture and business practices.

In 1923,  Isoroku Yamamoto was promoted to the rank of Captain. He changed his area of specialty to naval aviation, and commanded first the Isuzu, and then the Akagi ships during the next few years. He was promoted to Rear Admiral, then Vice Admiral. He attended the London Naval Conference in both 1930 and 1934, as the military accompaniment to the Japanese diplomats that attended. Between 1931 and 1940, Isoroku Yamamoto opposed several major military invasions including Manchuria, China, and Italy. Pro-war militarists became louder and louder in speaking out against  Isoroku Yamamoto, threatening assassination, but it wasn’t forthcoming.

In 1940,  Isoroku Yamamoto was promoted to Admiral. This was a surprise to many, as Hideki Tojo had become Prime Minister, and Tojo had been instrumental in the takeover of Manchuria. He had been at loggerheads with Yamamoto since that time. Some believe  Isoroku Yamamoto held onto his position due to his immense popularity amount the fleet, and his close ties to the imperial family. It became apparent around this time that Japan and the U.S. would go to war.  Isoroku Yamamoto was in charge, and his plan was to finish the war quickly, with a strike on Pearl Harbor.

The Pearl Harbor attack took place on 7th December 1941. From the mission’s outcome, it was deemed a total success. From a strategic point of view, it was a disaster as America sought revenge. It is also thought, that unbeknownst to Yamamoto, the U.S. was not going to attack in the normal course of events. Their Pacific Fleet was to keep the shipping lanes to Australia open, but not to attack outright.

After Pearl Harbor, Isoroku Yamamoto oversaw Japan’s continued attack on the Pacific region, striking undermanned installations of the American, Australian, Dutch and British, from Wake Island to Australia, and Ceylon. By March 1942, the Japanese had achieved their initial goals. Yamamoto and other military leaders waited for the British or the Americans to begin negotiating a ceasefire, but neither of the countries were interested in doing so. The Japanese considered alternative plans, including invasion of India or Australia, or Hawaii. It was decided though, that there were not enough men or shipping support for any of these plans.

Isoroku Yamamoto had devised a plan for Midway Island, which he believed would keep the U.S. Pacific Fleet out of action, giving Japan enough time to entrench itself in the Pacific islands chain. In the meantime, the Americans had broken the Japanese naval code and knew about  Isoroku Yamamoto’s plans and impending attacks. The Japanese were taken by surprise on 4th June 1942.  Isoroku Yamamoto counter-attacked, but soon realized he couldn’t win and aborted the mission.

The battle continued, but  Isoroku Yamamoto had lost face amongst his peers. In April 1943,  Isoroku Yamamoto undertook a tour of the region to boost morale. Due to having cracked the Japanese code, the Americans knew the tour was taking place. Under orders from President Franklin D. Roosevelt, Yamamoto was shot down in his plane. His body was found the next day and returned home to Japan, where he received a full state funeral.

As would be expected,  Isoroku Yamamoto received many military honors, some of which included:

Order of the Golden Kite, 1st class, and 2nd class

Grand Cordon of the Order of the Rising Sun Paulownia Blossoms, 1st class

Grand Cordon of the Supreme Order of the Chrysanthemum, 2nd class (posthumously)

Isoroku Yamamoto married Reiko Mihashi in 1918, and they had four children together, two sons and two daughters.