DECEMBER 28 birthday horoscope predicts that often you can’t stand false pride or childish drama. You like the quiet and find the woods to be a place of comfort and renewal. You tend to be loyal and dependable professionally and personally. People can close their eyes and trust you.

As a rule, the 28 December birthday personality prefer total honesty as opposed to hearing what would make someone momentarily satisfied. Characteristically, you are independent and like being single. However, as a friend, you have devoted childhood friends. 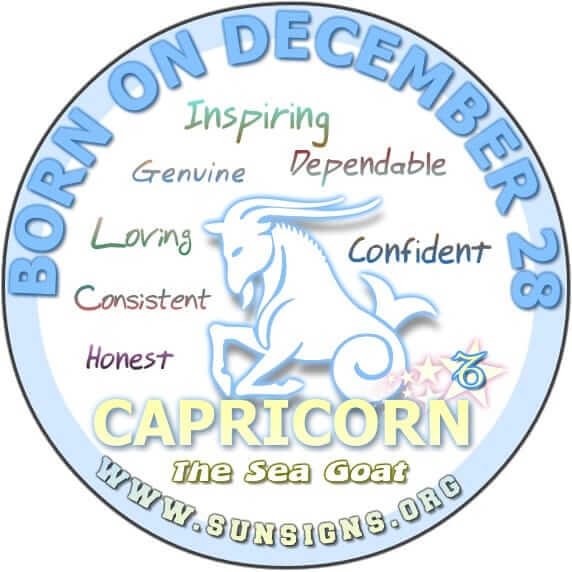 If today is your birthday, you could have a fear of rejection. This Capricorn birthday person is trustworthy, mature and ambitious and makes a good friend. Not needing anyone to validate your importance, you are a strong Goat who is resourceful. You are genuine, loving and honest individuals. It’s your confidence that attracts others.

As a drawback and a positive, you are relentless. Giving up is never an option with someone with a December 28 zodiac birthday. It would seem that you don’t take failure well. You know that persistence will eventually pay off.

However, you are not a weak individual. You are not the type to “show out” in public or make a scene. This turns you off as you are not likely to lose control and frown on others who do. As the 28th December birthday zodiac sign is Capricorn, you are ambitious people who have good recall.

The December 28th horoscope predicts that you are patient people who are also cautious but confident leaders. You know that failing is bound to happen when you don’t even try to accomplish anything. You don’t have to change the world, but individual progress is imperative to this ever-growing Capricorn. More personally, you inspire others to be their best.

As a lover, those born on December 28 are described as being consistent and committed. Generally, you form friendships that last a lifetime as well as your intimate relationships last a long time.

Once you decide to get married, it will normally be till death does its part. People who are energetic and dependable usually get this Capricorn’s attention. You may have to hit him or her over the head to notice you, but once you catch the goat’s eye, you will need to be persistent and creative.

As a health nut, you complete your exercise routine before most people get up in the mornings. Getting your vitamins and eating right comes naturally to you. The December 28 birthday personality loves to be in the kitchen. You’re a decent cook who likes to try exotic dishes.

You’re the kind of person who will take the stairs instead of the elevator or park far away from the entrance to do something extra. Additionally, you will walk or ride your bike to the corner store instead of jumping into the car to drive there. The fresh air also does wonders.

As a career choice, the 28th December birthday horoscope shows that you would be great as a math instructor or politician. Moreover, you are suited to wear your officer’s bars in the armed forces. Most of you born on this birthday are financially secure and know how to manage your accounts.

You like to spend, and you like to have money in your pockets. It’s just something about that feeling that is unmatched by any other feeling you could have. Those born on December 28 know how to reposition financial accounts and make them into prosperous investments. With a reputation for being shrewd, people often come to you for guidance.

You could be in the career you’re presently in because of family ties or advice. The December 28 birthday astrology predicts that you are responsible individuals and do well in positions of power and management. It’s not uncommon to find you in the spotlight as you need people around you.

You’re a social being, and people somehow provide stimulus for someone such as yourself. Typically, the December 28 birthday people are healthy mainly due to their commitment to eating right and exercising. You make friendships and relationships that last, and you are likely to marry only once. 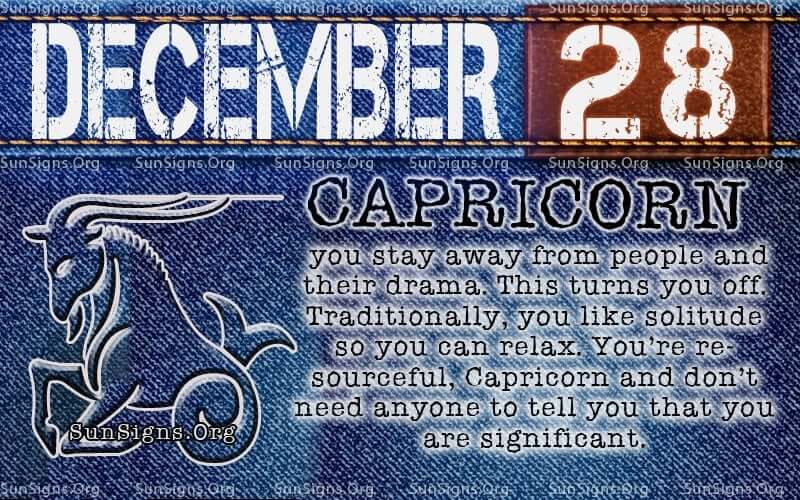 This Day That Year – December 28 In History

The Sea Goat Is The Symbol For The Capricorn Zodiac Sign

Your Birthday Tarot Card is Magician. This card symbolizes that you have the skills, talents, and concentration needed to achieve your goals. The Minor Arcana cards are Two of Disks and Queen of Pentacles

Number 1 – This number represents a leader with leading authority and motivational skills.
Number 4 – This number symbolizes excellent organization and the talent to be meticulous.

Green: This is a color that speaks of harmony, money, peace, clarity, and optimism.
Orange: This color signifies a sense of adventure, passion, joy, communication, and celebrations.

Saturday – This day is ruled by Saturn and signifies a day when you need to work doubly hard to become successful.
Sunday – This day ruled by the Sun is symbolic of your in-depth analysis of plans and excellent inspirational skills.

Garnet is a gemstone that is symbolic of love, romance, sensuality, and empowerment.

A leather belt for the Capricorn man and a tablet for the woman. The December 28 birthday personality adores gifts that are bought with some thought.