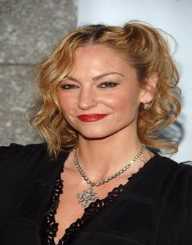 Andrea Donna de Matteo is an American actress who came to the limelight with her role in ABC’s Desperate Housewives as Angie Bolen. Born on January 19, 1972, she is also known for her role as Gina on the NBC sitcom, Joey. De Matteo has played roles in several films and television productions. She won a Primetime Emmy Award for Outstanding Supporting Actress in a Drama Series for her role as Adriana La Cerva in the HBO drama series, The Sopranos. Her works also include Sons of Anarchy as Wendy Case and Det. Tess Nazario in Shades of Blues.

Drea de Matteo was born on January 19, 1972, in Whitestone, Queens in New York to Donna and Albert de Matteo. Born of Italian descent, her mother is a playwright teacher, and playwright and her father was the owner of Avery Boardman and Carlyle. The family is of the Roman Catholic faith. De Matteo received education at Loyola School after which she enrolled at New York University’s Tisch School of the Arts. Growing up and even at her school days, she aspired to become a director. However, this changed as she gained roles in films, hence, switched to an acting career.

Initially wanting to pursue a career in directing, Drea de Matteo roles in The Sopranos, helped her to launch an acting career fully. De Matteo has played roles in several films and television productions. Some of her earlier film roles were an uncredited role in ‘M’ Word, 1996 and as Hilary in Meet Prince Charming in 1999. Her films include The Perfect You, Swordfish, and Prey for Rock & Roll. In 2005, she featured in the remake of John Carpenter’s 1976 film Assault on Precinct 13. She had positive reviews with her role in R Xmas, and as Dana in The Good Life. She has also featured in films like Broken English, Lake, City, Once More with Feelings and the film adaptation of Dark Places, 2015 as Krissi Cates among several others.

Drea de Matteo has also played roles in several television productions. From 1999 to 2006, she played the role of Adriana on The Sopranos, winning an Emmy for Best Supporting Actress (Drama) in2004. She was also nominated for a Golden Globe Award. She played the role of Joey Tribbiani’s sister Gina in the sitcom Joey from 2004 to 2006. From 2008 to 2014, she played Wendy Case in the FX series Sons of Anarchy. De Matteo appeared as Angie Bolen, mother of the Bolen family in ABC’s show Desperate Housewives season six.

Drea de Matteo left the show on personal grounds in 2010 at the season six finale. She was the mother of the lead character Steve Wilde in FOX comedy show Running Wilde. She appeared in episode 9 of season 1. Her most recent work is the role as Det. Tess Nazario in the NBC drama series Shades of Blues from 2015. The series also stars Jennifer Lopez and Ray Liotta.

Drea de Matteo dated Michael Sportes, with whom she opened an East Village clothing store, Filth Martin 1997. The store closed in 2004. After breaking up, she dated musician Shooter Jennings in 2001. They engaged on June 11, 2009, after Jennings proposed to her onstage at a show at the Stanley Centre. The couple has two children Alabama Gypsyrose Jennings and Waylon Albert “Blackjack” Jennings. Their relationship did not end in marriage. De Matteo started dating Whitesnake bass guitarist Michael Devin and engaged in July 2015. On March 26, 2015, she lost her apartment home of 22 years to a gas explosion that destroyed some buildings in New York City.