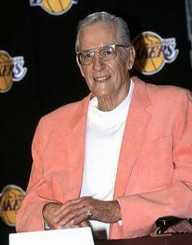 American professional basketball player George Lawrence Mikan Jr. was born on June 18, 1924, in Joliet, Illinois, United States of America. Born as his parents’ first child, Mikan attained a height of five feet nine inches at the age of eight. He reached a height of six feet when he was eleven years old. He along with his two younger brothers Joe and Ed used to work in the restaurant-cum-bar his parents Joe and Minnie Mikan owned after returning from their school.

He attended Joliet Catholic High School and broke his leg during a summer pickup game of basketball. For the next one and a half year, he had to remain in bed to get himself back on his leg. He entered the Chicago Archbishop Quigley Preparatory Seminary in 1938 with the intention to become a clergyman. However, he soon shelved the idea and returned to complete his high school graduation.

In 1942, George Mikan enrolled at the DePaul University, Chicago, Illinois to study law. At the time of his admission at the DePaul University, he cut a sorry figure due to his giant frame of six feet ten inches height and a weight of 245 pounds coupled with his acute nearsightedness for which he wore thick glasses. At that era, smaller and swifter players dominated the basketball grounds, and nobody encouraged Mikan to seriously pursue the game of basketball due to his awkward frame and hindered vision.

It was Ray Meyer, the 28-year-old greenhorn coach of the DePaul basketball team, who first encouraged Mikan to embrace the game and after that gradually molded him into a reckoning force of basketball with his shot blocking capabilities and a lethal hook shot.

During his college days, George Mikan was a two time NCAA College Player of the Year and also a three-time All-American. He won the National Invitation Tournament for DePaul in 1945 and was declared the Most Valuable Player (MVP) for his exploits in the tournament. After due completion of his college education in 1946, he was drafted by the Chicago American Gears playing in the then National Basketball League, a precursor to the National Basketball Association (NBA).

During the 1946-47 NBL season, George Mikan played 25 games for his team and was instrumental in winning the World Basketball Tournament earning the Most Valuable Player Award for his score of 100 points in 5 games. He was also voted to be a member of the All-NBL team.

The following season, NBL disintegrated to pave the way for a 24-team league of Professional Basketball League of America, planned and conceptualized by Maurice White, President of the American Gears. As the proposed league could not survive beyond a month after its inauguration, all the players of the league were distributed equally among the existing 11 teams of the NBL. As a result, Mikan was signed by the Minneapolis Lakers and got the opportunity to play under its coach John Kundla.

The first season of George Mikan with the Minneapolis Lakers turned out to be quite incredible. He became the leading scorer of the NBL during the 1947-48 season and with his score of 1195 points became the first player to score 1000 or more points in an NBL season. His team won the title in that season, and Mikan was declared the Most Valuable Player of the league.

During the 1948-49 season, Lakers joined the Basketball Association of America along with three other NBL franchisee abandoning NBL. Mikan continued with the same intensity in the new league, leading and setting a single-season scoring record and winning the BAA title for Lakers defeating Washington Capitols in the final.

After the conclusion of that season, NBL and BAA merged to form National Basketball Association (NBA). The 1949-50 inaugural season of the NBA was as usual dominated by George Mikan leading his team to win the inaugural NBA title in 1950.

In his nine seasons with the Minneapolis Lakers, Mikan scored 11764 points in 520 regular games and won the NBA Championship title five times.

George Mikan married girlfriend Patricia in 1947 and remained together until his death 58 years later. They together had six children, four sons, and two daughters. He breathed his last on June 1, 2005, in Scottsdale, Arizona after having suffered complications related to diabetes and kidney failure.