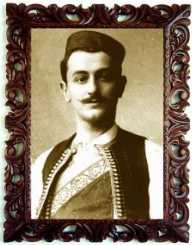 Bosnian Serb poet Aleksa Santic was born on the 27 May 1868. His parents were Risto, and Mara Santic and his father was a merchant. He was one of four children. After the death of his father, Santic and his siblings were placed in the car of his uncle, Miho.

Between 1896 and 1901 Aleksa Santic was editor of Zora. He was also involved in music and was president of the Guise, a Bosnian music organization. During World War I he was taken hostage by the Austrians.

Aleksa Santic published hundreds of poems and also wrote seven plays and other works. Most of his writing concentrated on social and cultural issues.