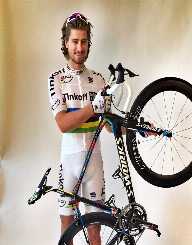 Champion cyclist Peter Sagan was born 26 January 1990. He is the youngest of five children. He has three brothers and a sister. His older brother Juraj Saga is also a professional cyclist.

Peter Sagan was interested in riding bikes from a young age, and when he was nine, he joined a local club. At this time, was riding both road and mountain bikes. Sagan’s first professional cycling break came when he joined Dukla Trencin Merida, a Slovakian team in the Continental Pro second division.

In 2008, he won the Junior World Championship in Vale di Sole. Then, the same year, he finished second at the Cyclocross Junior World Championships and the Junior Paris-Roubaix. After joining a Pro Tour team, Quick Step, for road testing, he could not get a contract and was thinking about quitting road racing. Fortunately, his family talked him out of quitting professional cycling He decided instead to approach Liquigas-Doimo. They offered him a two-year contract (2010-2011), the contract; later extended to 2012. Doctors and managers were impressed with Sagan’s strength and fitness.

Peter Sagan took part in the Tour Down Under held in Australia in January 2010. He was involved in a smash in Australia and need stitches but kept cycling. In joined three riders, including Australian Cadel Evans to help Sanchez win. During the Paris-Nice (2010) Sagan won his first and second pro tour stages. Sagan then won the 5th and 6th stages at the Tour of California (2010). At the 2010 Tour of California, Sagan won the 5th and the 6th stage,

The year started well with Peter Sagan winning both the Slovak National Road Championship and the Gwent-Wevelgem. He then won the Brabantse Pijl, GranPremio Citta di Camaiore, and the Grand Prix Cycliste de Montréal. In the USA Pro Cycling Challenge, he was awarded the green jersey after coming to the first, third, sixth and seventh stages. He then won the green jersey in the 2013 Tour de France. His winning form continued throughout 2014 and 2015.

Peter Sagan dominated the Tour de France green jersey competition but did not manage a Grand Tour stage win. He came in second at Strade Bianche, third at Gent-Wevelgem and six at Paris-Roubaix.

The season marked the end of his time with the Cannondale team. As part of his preparation for his new team, Tinkoff-Saxo, he joined the team for a ride ascending Mount Kilimanjaro in Tanzania, Africa.

He won the 2015 Tour of Flanders and subsequently ranked number one in the UCI World Rankings.
At the Tour de Suisse, he broke Hugo Koblet, and Ferdinand Kubler’s record for the most stage wins at the Tour de Suisse. Then at the Tour de France, he became only the second rider to win the points clarification five times.

When the 2016 European Road Championships was opened to elite riders, he became the inaugural winner of the men's road race.

Also in 2016, Peter Sagan became the first rider to retain the world title since Paolo Bettini, at the World Road Race Championships in Qatar.

Peter Sagan participated in the Tour Down Under and finished second on stages 3, 4 and 6. He finished second in the Omloop Het Nieuwsblad. Kuurne-Brussels-Kuurne was the 90th win of his career and the first for the new Bora-Hansgrohe team. He had an accident at the Strade Bianche 2017 and withdrew due to an injury. He then won his second race of the season in Stage 3 of Tirreno-Adriatico.

He also won Stage 5, won Red Jersey on of the Points Classification and came in second behind Fernando Gaviria.

Peter Sagan married Katarina Smolkova in 2015, and they reside in Monaco.

One of his nicknames is The Terminator. This was because as a young, enthusiastic rider, he was a bit heavy-handed with his bikes.

Peter Sagan co-owns a hair salon with his sister; who also still cuts his hair.

Cycling News reported in March 2017 that Filippo Pozzato said he believed that he that Peter Sagan was the strongest rider of all time.