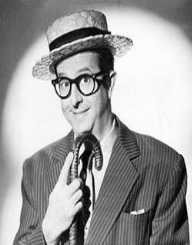 Philip Silvers was born 11th May 1911, to Saul and Sarah Silver. He was born in Brooklyn, New York, in the United States. Silver was one of eight children, with seven brothers and two sisters.

Phil Silvers’ career began when he was 11 years of age. When the film projector broke down in cinemas, which was a common occurrence at the time, Silvers would sing to entertain the audiences until the movie was up and running again. At age 13 he was a singer in the Gus Edwards Revue, and from there he worked in vaudeville as a burlesque comic.

Silvers joined the Vitaphone studio where he acted in several short films, including Ups and Downs (1937). His stage debut was on Broadway in 1939, in a show called Yokel Boy. The show was unsuccessful and short-lived, but Silvers received rave reviews for his part.

His first feature film debut was in Hit Parade of 1941. Over the next decade, Silvers acted in movies with stars such as Gene Kelly, Rita Hayworth, Humphrey Bogart, and W. C. Field. His films included Lady Be Good (1941), Tales of Manhattan (1942), and Summer Stock (1950).

Phil Silvers wrote the lyrics for “Nancy (With the Laughing Face)” and talked Frank Sinatra into recording it for his daughter. The song became a huge hit in 1945 for Sinatra. Towards the end of World War II, Silvers did several very successful tours with Sinatra to entertain the troops stationed overseas. In 1955, Silvers starred in You’ll Never Get Rich, as Sergeant Ernest G. Bilko. He became a household name due to the huge popularity of the show. The show was later renamed The Phil Silvers Show.

In December 1960, Silvers returned to Broadway in a production called Do Re Mi. Silvers continued to appear in movies through the 1960s, as well as various television shows. He was a regular guest on The Beverly Hillbillies, and appeared on several variety shows including The Carol Burnett Show, The Dean Martin Show, and Rowan & Martin’s Laugh-In.

His autobiography was titled, This Laugh Is On Me.

Among his awards and honors, Phil Silvers has won two Tony Awards. One for his role in Top Banana (1952), the other for his part in Forum (1972).

In 2003, the Radio Times Guide to Television Comedy voted The Phil Silvers Show as Best Sitcom.

In 1945, Phil Silvers married Jo-Carroll Dennison. The couple divorced in 1950. In 1956, he married Evelyn Patrick. The couple had five children, all daughters, but divorced in 1960. Sadly, Silvers suffered from chronic depression and was also an addicted gambler. In 1962, he suffered a nervous breakdown.

In 1972, Silvers had a stroke which left him with slurred speech. He continued to work through the 1970s and into the early 1980s. He died on 1st November 1985 of natural causes, passing away in his sleep.