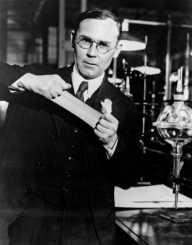 As a child and teenager, William Lipscomb was fascinated by science. Like many children, he had a chemistry set. He also loved to spend time out in nature; he would often collect various plants and even bugs. He studied them in his free time.  When he was a young adult, he attended the University of Kentucky. He graduated from this school in 1941 with a bachelor's degree in chemistry. One fun fact about him is that he was a great clarinet player, and earned music scholarships while he was attending this university.

After graduating from University, William Lipscomb earned a job as a teacher’s assistant at the California Institute of Technology. While working here, he also continued his studies. He still focused on studying chemistry, which eventually earned him a Ph.D. in chemistry.

In 1946, William Lipscomb began teaching at the University of Minnesota. While here, he began focusing his research on borane (BH3), a colorless gas made from the elements boron and hydrogen. One of the many things he did with his compound were discovering the structure of boranes (which would later be used by him to discover the structure of carboranes (made of boron, hydrogen, and carbon). With discovering structures, he was also able to discover a three-center two-electron bond, which was previously unknown.

In 1959, William Lipscomb left the University of Minnesota and began teaching chemistry at Harvard University. Three years later, he also became a chairman of the chemistry department.

He held this position until 1965. It was while teaching here that he began focusing on studying the structure of proteins and enzymes. William Lipscomb discovered several new protein structures, including the following: Carboxypeptidase, Aspartate Carbamoyltransferase, Leucine Aminopeptidase, Methyltransferase, Chorismate Mutase, and Bisphosphatase.

In 1982, he began working on the board of directors for Dow Chemicals. He continued working here until 1990.

In 1990, William Lipscomb earned the title of professor emeritus at Harvard. He stayed at this university until his retirement.

William Lipscomb wrote one scientific book during his career: Boron Hydrides. This book was first published in 1963, but newer editions of the book have come out since then.

William Lipscomb has also contributed to some scientific journals during his career.

All of Lipscomb’s awards are due to his scientific discoveries. Some of his most prestigious awards are listed below.

He was a member and a fellow of the following groups: National Academy of Sciences, Royal Netherlands Academy of Arts and Sciences and the Guggenheim.

William Lipscomb has two honorary degrees, one of which being from the University of Munich.

William Lipscomb married Mary Adele in 1944. This couple had three children together. He later married Jean Evans in 1983. Together, the couple adopted one daughter.