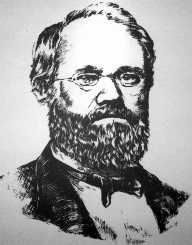 For his revolutionary methods and use of scientific principles in metal bridge building, Squire Whipple came to be the ‘Father of Iron Bridge building in America.’ He was a remarkable civil engineer who contributed many original ideas to the art of metal bridge construction.

Squire Whipple was one of the first people to use iron in making bridges in place of wood. He also constructed canals and roadways and is considered one of the most excellent civil engineers of all time. One of the bridges based on his designs still stands today more than a century and a half later.

Squire Whipple was born on September 16, 1804, in Hardwick, Massachusetts. His star sign was Virgo. His parents James Whipple and Electra Johnson were simple farmers. His father also owned and ran a cotton-spinning mill which he built himself. This allowed young squire to witness the construction of structures and he became very interested in this art.

Squire Whipple went to study at one of the best schools in Otsego County near Cooperstown, New York. He enrolled in the Hartwick Academy and Fairfield academy after passing high school. He was a bright student and got his graduate degree in only a year from the Union College in Schenectady, New York. He was ready to practice the art of constructing structures as a civil engineer.

At the start of his career near 1830, Squire Whipple became an apprentice and worked on the construction of canals and roads. One of his early assignments was on the Baltimore and Ohio railroad where he worked as a leveler. During this time he also designed some mathematical instruments by himself.

Squire Whipple came up with the idea of an iron bridge truss in 1840. Before that, the primary material used in building bridges was wood. Whipple patented his truss rod design and began building iron bridges. Naturally, the initial response to this design technique was skepticism.
To get his idea accepted, Whipple constructed an iron bridge entirely using his own money. This convinced the commissioners of the bridge’s stability, and he got the contract for building one across the canal at First Street in Utica.

Squire Whipple then built several iron bridges throughout America and earned the reputation of being the ‘Father of Iron Bridge building in America.’
Some of his major works include a Wrought and cast iron bridge over the Albany and Northern railroad, an iron bridge near Watervliet, New York, a vertical lift bridge over the Erie Canal in Utica, and long span trapezoidal bridges on New York railroads.

Whipple was an exceptional civil engineer of remarkable skill, and some of his designs are even used until today. He brought about a significant change in the field of civil engineering.

Squire Whipple also wrote a book titled A work on Bridge Building in which he discussed his ideas on building wooden and iron bridges. The book was published in 1847. Using his designs, a builder named Simon de Graff built a ‘Whipple Cast and Wrought Iron Bowstring Truss Bridge’ or the Normanskill Farm bridge in 1867-69. The bridge is still intact today - more than a hundred years have passed since it was first constructed.

Squire Whipple was the first honorary member of the resurrected American Society of Civil Engineers in 1868.

Not much is known about Squire Whipple’s own life as he was a private person. His wife was W. Anna Case. The couple did not produce any children.