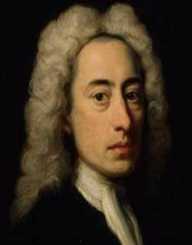 Alexander Pope was an English poet known for his satirical style.

Alexander Pope was born in London on May 21, 1688. His father, Alexander Pope Senior, was a textile merchant. His mother’s name was Edith. His family was Catholic, which significantly affected his later life. His religion influenced his work, as well as his education. At the time, the Church of England did not allow Catholics to enter universities. He was taught at home by his aunt and by Catholic priests.

He briefly attended the Catholic schools at Twyford and Hyde Park Corner. He was mostly self-taught. He was very interested in literature, reading books in English, Latin, Greek, French, and Italian. He suffered from a form of tuberculosis from a young age. He developed a hunchback, and his stature was very short.

Alexander Pope started making friends with talented people from a young age. He first met Baron John Caryll, who had many connections in the literary circles. He introduced him to other prominent figures, such as the poet William Walsh, and the playwright William Wycherley. Pope later started the Scriblerus Club with his friends Jonathan Swift, John Gay, John Arbuthnot, and Thomas Parnell.

Together they created the fictional writer MartinusScriblerus. They used his character to mock ignorance and the wrong sides of the learning process. Apart from that, Pope contributed to the tragedy Cato by Joseph Addison. He also occasionally wrote for The Spectator and The Guardian.

In 1709, Alexander Pope published the anthology Poetical Miscellanies. The most successful songs in the collection were the four Pastorals, which brought him considerable recognition. Two years later, he released the poem An Essay on Criticism. In it, he discussed the way writers and critics behaved in his time.

In 1712, he published his most famous work, The Rape of the Lock. The poem tells the story of the disagreement between Arabella Fermor and Lord Petre, who cut a lock of her hair without permission. This was a real event, and Pope satirized it in his poem to mock the members of the high society.

Alexander Pope spent the next few years translating the Iliad and the Odyssey, the epic poems from Ancient Greek author Homer. After that, publisher Jacob Tonson hired him to edit some of Shakespeare’s work. He rewrote some of the verses, and he removed plenty of lines, placing them as footnotes instead.

In 1728, Alexander Pope published his poem The Dunciad. It was a satire which talked about the goddess Dulness and her servants who brought stupidity to the United Kingdom. The next year, he published the second version. From 1731 to 1735, he published four poems called Moral Essays. In them, he criticized architecture and the characters of men and women.

He also published the series called Imitations of Horace, discussing the corruption and poor artistic taste during the rule of King George II. Also, he wrote the poem An Essay on Man, exploring the relationship between God and humans. In 1742 and 1743, he published the third and fourth expanded versions of The Dunciad.

Alexander Pope lived with his parents until 1719. After that, he moved to Twickenham, an area close to London. He built a big villa with beautiful gardens, which became the subject of many paintings in the eighteenth and nineteenth century. He never married, but he had many close female friends. His lifelong friend, the aristocratic woman Martha Blount, was supposedly his lover.

Alexander Pope's health, which had already been bad his entire life, became much worse in the 1740s. He passed away in his villa surrounded by his friends on May 30, 1744. He was buried at St. Mary’s Church in Twickenham, London.