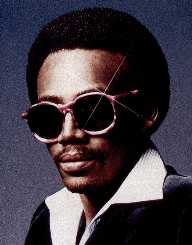 American bass player, singer and songwriter Bernard Edwards was born on October 31, 1952 in Greenville, North Carolina. He grew up in Brooklyn, New York City. In the early 1970s, he met with Nile Rodgers and formed the Big Apple Band. Soon after, the drummer Tony Thompson and singer Norma Jean Wright were joined the two, and the band Chic was formed.

During his time with Chic, Edwards produced many era-defining hits such as “Dance, Dance, Dance,” “Le Freak,” “Good Times” and many others. Edwards and Rogers also wrote and produced music for other bands. They collaborated with Sister Sledge, Sheila and B. Devotion, Diana Ross and other artists and produced many successful hits. From these, the most famous hits became “We Are Family,” “I’m Coming Out” and “He’s The Greatest Dancer.” Edwards also wrote and produced Diana Ross’s top hit “Telephone” which was featured on her platinum album Swept Away in 1985.

In 1983,  Bernard Edwards released his first and only solo album Glad To Be Here. Two years later, he was instrumental in forming the group Power Station and produced the band’s first album The Power Station. The album featured drummer Tony Thompson from Chick, singer Robert Palmer as well as Duran Duran member John and Andy Taylor. After collaborating with Palmer on this project, Edwards went on to produce his album Riptide.

Throughout the 1980s and 1990s, Edwards continued to produce several artists. He worked together with Adam Ant, Rod Stewart, Air Supply, ABC and Duran Duran. His son, Bernard Edwards Jr., became a multi-platinum producer, who worked with Jennifer Lopez, Beyonce, Tony Yayo and many more. In 1992, Edwards and Nile Rodgers teamed up for Chic reunion and produced the album Chic-Ism.

In 1996, Nile Rodgers and Bernard Edwards were invited to Japan to perform. Just before the concert, Edwards fell ill but refused to cancel his performance. He had to be helped many times during the performance. After the concert, Edwards told Rodgers that he just needed to rest and went to his hotel room. He was found dead the following morning, and the cause of death was due to pneumonia.