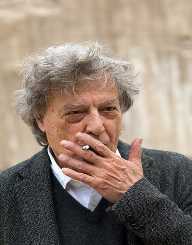 Born on July 1937, Tomas Straussler best known as Sir Tom Stoppard is a Czech-born British screenwriter and playwright. He came into recognition for his articulate writings for radio, TV, film and stage works. With his works like Arcadia, The Real Thing, Professional Foul, Every Good Boy Deserves Favour and The Coast of Utopia, Stoppard became popular among play lovers. His plays are mostly based on political freedom, human rights, and censorship. His works have gained him an Academy Award, Tony Awards, and others. In 1997, he was knighted.

Tom Stoppard was born in Zlin, Moravia in Czechoslovakia to EugenStraussler and MartheBeckova. His father was a doctor with the Bata Shoe Company. At age two, he and his family fled the Nazi invasion of Czechoslovakia in 1939, through his employer re-assigning him to a branch of the company in Singapore. In 1940, the family with exception of his dad moved to Australia prior to Japans invasion of Singapore. At age four, his dad died while volunteering his expertise as a doctor to the British army.

Tom Stoppard and his family’s unplanned migration seems not to have ended as in 1941; they had to move to Darjeeling in India. It was there that Tom Stoppard started his education at the Mount Hermon School, an American multi-racial school. Tom Stoppard got the surname, Stoppard after his mum married a British army major, Kenneth Stoppard in 1945. Tom Stoppard dad brought the family to England after the war in 1946. In England, Tom Stoppard attended the Dolphin School, Nottinghamshire and completed at the Pocklington, Yorkshire. He didn’t receive any form of University education, a decision he later regretted.

Tom Stoppard had an early career after his education when he worked with the Western Daily Press as a journalist in 1954. He worked with the newspaper for four. Tom Stoppard then had an offer from Bristol Evening World where he wrote feature articles, humor columnist, and drama critic. This new position exposed Stoppard to the theatre and made some friends in that industry.

His new role at the Bristol was taken with keen interest, and Tom Stoppard released his first radio play in 1953-54. Having an interest in theatre now, he completed is debut stage play, A Walk on the Water in 1960 which later repackaged and released with the title Enter a Free Man, 1968. The play was in 1963 was shown on the British Independent Television and also staged in Hamburg. Within 1962 and 63, Stoppard worked for the Scene magazine as a drama critic.

In 1964 Tom Stoppard traveled to Germany where he spent five months on Ford Foundation’s grant. It was there that he came out with the play Rosencrantz and Guildenstern Meet the King Lear which metamorphosed later to his flagship play Rosencrantz and Guildenstern Are Dead. The play won him a Tony Award at the time. His works for radio and TV and theatre continue with the release of works like “M” is for the Moon Among other Things, 1964, A Separate Peace, 1966, and If You’re Glad I’ll be Frank, 1966. During these times he was also writing for BBC radio and changed some of his works to suit radio, films and television settings.

After his successes in previous works especially with Rosencrantz and Guildenstern Are Dead, Tom Stoppard brought out Jumpers, 1972, Travesties, 1974. Aside from his work as a playwright and screenwriter, he wrote a novel, Lord Malquist and the Moon which was published in 1966.

In the 1980s, Tom Stoppard intermittently translated plays of Johann Nestroy, Slavomir Mrozek, VaclayHaval and Arthur Schnitzler into English some amid writing his own original works. Tom Stoppard has also collaborated in works like Indiana Jones and the Last Crusade, though he was not credited and Sleepy Hollow did with Tim Burton. His most recent work was Darkside for BBC Radio 2 in 2013. Stoppard used his works to champion political, social and human rights.

Tom Stoppard has married time with Josie Ingle a nurse being his first wife. They married from 1965 to 1972 and had two children, Oliver Stoppard and Barnaby Stoppard. He then married Miriam Stoppard from 1972 to 1992 with whom he also had two sons, Ed Stoppard and Will Stoppard. Tom Stoppard left and had an affair with actress Felicity Kendal. His current with is Sabrina Jane Guinness who he married in 2014.

Tom Stoppard has won awards and honors like Evening Standard Award for Most Promising Playwright, UK, 1967, 1967, London Theatre Critics Award Rosencrantz and Guildenstern Are Dead (UK), Prix Italia, 1968, Evening Standard Award for Best Comedy of the Year (UK), 1974, Giles Award, The Pen Pinter Prize, 2013,  four Tony Awards and an Academy Award. He was elected as a Fellow of the Royal Society of Literature 1972, CBE 1978, Knight Bachelor, 1997, Honorary Doctor of Letters, University of Cambridge, 2000, President of The London Library, 2002 and Honorary Doctor of Letters, University of Oxford.

The Dissolution of Dominic Boot, If You’re Glad I’ll be Frank, The Dog it was that Died, On Dover Beach, Albert’s Bridge and Darkside, etc.