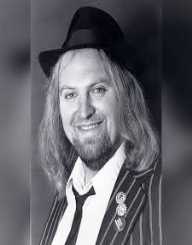 Judge Dread was born on May 2nd, in 1945. He earned his fame for his reggae music. Aside from this, he was also a ska musician. Back in Jamaica, he earned credits for being the first English individual to have a record hit. BBC banned some of his songs due to their sexual content.

Alexander Minto Hughes alias Judge Dread was born on May 2nd, in 1945. During his teens, he was introduced to reggae genre of music. With time, he earned himself a job as a bouncer, thanks to his powerful physique. His job as a bouncer aided him in crossing paths with Jamaican artists such as Prince Buster and Derrick Morgan.

At some point, Dread pursued a career as a professional wrestler. After that, he took a small role as a debt collector. Subsequently, he also worked as a DJ. During the 1960s, he worked for the Rolling Stones band as their bodyguard.

Sooner or later, Judge Dread's longtime friend enjoyed immense success with the release of the single dubbed “Big 5” in 1969. As a result, Dread took advantage of his success to earn credits for himself for releasing “Big Six.”

“Big Six” performed well in the international scene as it was ranked first in African charts. Similarly, it was ranked 11th, in the UK singles chart.

Other well-performing singles were later released including “Big Seven,” and “Big Eight.” Following his short success with his reggae music, he surprised many as he was white. Often, people had been accustomed to blacks singing reggae music. Compared to other renowned reggae celebrities such as Bob Marley, Dread’s songs performed well during the 1970s.

Judge Dread passed away on 13th, March in 1998. He suffered a heart attack during one of his performances at The Penny Theatre situated in Canterbury. After collapsing, his fans thought that it was part of the act to behave in such a manner. He was then rushed to Kent and Canterbury Hospital where he kicked the bucket.