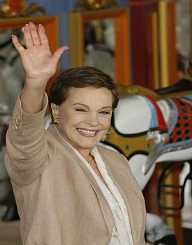 Julie Andrews was born on October 1, 1935, in Walton-on-Thames,Surrey,England,United Kingdom. She is an actress, singer, and dancer. Her mother Barbara ward and stepfather both were theatre performers. From child hood she was a good singer and had wonderful voice, so parents immediately put her in singing career. She gave lot of performances from child hood itself. At the age of 10 she gave her first performance in 1945.During her young age her parents were divorced. Barbara ward wells married to Ted Andrews. Andrews’s family was very poor, living in slum area of London. In 1945 she gave stage performance with her parents, sometime solo or duet with her father and mother played the piano. The family travelled throughout England giving performance for their living. Julie had an aunt who had small dancing School by watching other students Julie learnt ballet and tap.

In 1948 Andrews made her first stage appearance in ‘The Boy Friend ‘and became a genuine star after two years. She took major parts in several children movies like Little Red Riding Hood, Aladdin and Jack and the Beanstalk. In 1956 Andrews acted the role of Eliza Doolittle in super hit movie ‘My Fair Lady’ which was based on music she received the best actress award for this film her acting career continued in 1957 when she starred in  T.V production of Cinderella.

Julie was given chance acting infamous Walt Disney film ‘Mary Poppins’ ’this film got her best actress award of the year. Following year she was chosen in musical film Sound of Music acted as Maria in which she won the golden award for best acting. This made her more successful in her career. Gift of her voice made her to sign more new projects. In 1964 -66 she acted in Alfred Hitchcock s thriller ‘Torn Curtain’. Andrews got popularity from Darling Lily in 1968 and this film hit the box office.1968 to 1972 made her career little down because of starred in flop movies.1n 1973 she recovered form bad period and started acting again in award-winning TV shows.

In 1970 Andrews acted with Rock Hudson film directed by her second husband Blake Edwards. In 1971she appeared as a guest for the opening of Walt Disney World. In 1972-73 she started acting in her own television serials. Andrews started making film after four years Tamarind seed directed and written by her husband in July 1974. In 1977 she was in   Muppet Show as a star guest. In 1987Andrews starred in Christmas special Julie Andrews which won the Emmy awards. In 1992 Andrews starred first in her TV show.

In 1988 and 1990 s she continued acting in several films. Andrews starred in ‘Princes Diaries’ acted with new star Anne Hathaway, this family film most successful of that year. In 1991she acted in documentary film Our Sons, it is about AID victims. In 1992 Andrews sang the role of Anna in a recording The king and I great surprise is she never played the part on stage, with UK actor Ben Kingsley her royal partner in the studio. In 1997she was forced to quit the show because of her throat problem.  In 2000 Queen Elizabeth made Andrews as a Dame Commander of the British Empire. Andrews involved in many charities like the United Nations International Fund for Women.

In 2004 to2010 she gave voice roles in the film ‘Shrek’ ‘Shrek Third ‘ and she wrote many books for children like The Very Fairy Princess, Dragon Hound of Honour etc.

In 1965 Andrews got award for best actress and leading role in ‘Mary Poppins. In 1966 she got best award for motion picture musical comedy for Sound Of Music. In 1983 she received best actress in musical film for ‘Victor Victoria’ In 2001 Andrews received Kennedy center honors the same year she met with Sound of Music co-star Christopher Plummer in a live television programme. In 2005life time achievement award from Los Vegas filmcritic’s society.

On May 10th 1959 she was married to Tony Walton is a set designer. She got a child and they divorced in 1967. In 1969 she got married to Blake Edwards and took care of two children and he died in 2010. Around 1997 she developed throat problem she underwent throat surgery at New York hospital. In spite of her bad voice, she kept her self-busy with new plans. In 1998 she produced Dr. Doolittle in London in which she executed the voice of Polynesia parrot recorded nearly 700 sentences and sounds.

Apart from charitable organizations, she started wonderful books for children. Andrews joined with her daughter Emma Walton Hamilton to publish books for children and young readers. In 2008 she released her Autobiography ‘Home ‘A memory of my Early years.