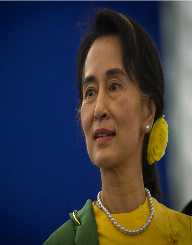 On the 19th of June 1945, Aung San Suu Kyi was born in what was the old British colony of Burma. Her father held the position of a Prime Minister under British rule. He was assassinated in 1945.

Aung San Suu Kyi's mother, also a politician, was ambassador to India in 1960.Suu followed this trend by studying politics, philosophy, and economics at the University of Oxford, where she received her B.A in 1967, after high school in India.

Aung San Suu Kyi's life took an unexpected turn in 1988 when she went back to Burma to care for her ailing mother. She eventually stayed back after that.

There was a coup d’état in Burma, that was staged in 1962. This was staged in protest of dictator U Ne Win. Protests over his political style persisted until his resignation in 1988 as chairman. The country was left in the hands of a military junta. They continued to support assorted violent protests and lobbies to destabilize the nation.

This happened at the same time that Aung San Suu Kyi returned to Burma. The nation was in an uproar over U Ne Win, with people being murdered daily. Suu started to oppose his autocratic rule publicly, and she rallied for human rights. It did not take long for her to be targeted and in July in 1989, Suu was placed under house arrest by the orchestrators of the protests, The Union of Myanmar- formally Burma. During this time, Suu lost all connection to the outside world.

They tried to get her to leave, offering  Aung San Suu Kyi freedom, but she stubbornly refused. Suu insisted that as long as the junta oppressed the nation, she would continue to oppose them. Suu wanted a country, where there was a civilian government and political prisoners were freed. Suu lobbied for a democratic company.

Aung San Suu Kyi was eventually released in July of 1995. Suu's political activities persisted, as she attended the NLD party congress, despite continual military opposition. In 1998, Kyi founded a representative committee, declaring it as the country’s ruling and legal body.

The junta was furious at this, and she placed under house arrest again in September 2000. After almost two years, in May 2002, Suu was released. This would not be her last arrest, only her first of the new century.

By 2003, conditions had only worsened, and the NLD was clashing with pro-government demonstrators.  Aung San Suu Kyi was again put under house arrest, and her sentence was repeatedly renewed. Year after year, Suu's sentence was renewed, and year after year, the international community supported her; repeatedly calling for her release. Their calls fell on deaf ears, however, as their cries for her freedom was never responded to, let alone acknowledge.

Her New Road To Freedom

In support Aung San Suu Kyi, the NLD refused to re-register the party until the new laws were abandoned. As a result of this, government parties ran unopposed in the 2010 elections and comfortably won the vast majority of legislative seats. Immediately, charges of corruption and fraud persistently followed them. Six days after the elections, Suu Kyi was released from house arrest.

In November of 2011, the NLD announced that it would re-join the political landscape, re-registering itself as a political party.  Aung San Suu Kyi registered to run for a seat in parliament in January 2012. In the elections held on 1st April 2012, she eventually won in the aftermath of a tough campaign.The state-run MRTV confirmed her victory. She took office on the 2nd of May, 2012, having a place in the new Myanmar government that she had spent over a decade under house arrest fighting for.

After Aung San Suu Kyi won re-election for herself and her party in 2013, they faced the parliamentary elections on the 8th of November, 2015. It was seen as the most open voting process in the country’s history. In less than a week after their victory, the NLD was able to declare the victory a landslide, winning 378 of the 664-seat parliament, becoming the first democratically and fairly, and elected government in the nation’s short history

In The Hold Of Power

The party selected the new president for Burma following the elective processes in March 2016 and Htin Kyaw, was returned as a winner. He had been a long-time advisor to Suu Kyi. By the end of the month, he had been sworn in and was the president of Myanmar. Suu Kyi is not allowed presidency due to her marriage to a British national.

Despite this, in April of 2016, the position of state counselor was created and subsequently given to  Aung San Suu Kyi to allow her a more significant role in the nation. Suu continued to play in the position of influence although she was not the President.

Aung San Suu Kyi was awarded the Nobel Prize for Peace in 1991. In the following year, Suu also received the Rafto Prize as well as the International Simón Bolívar Prize in 1992. The Jawaharlal Nehru Award was next in the year 1993, to complete her successive awards.

Aung San Suu Kyi was awarded the American Congressional Gold Medal in December of 2007, after a 400-0 landslide vote. It was the first time that someone serving a jail term had bagged the award.

This brought even more attention to  Aung San Suu Kyi cause and was a way of reintroducing the situation in Myanmar to the international landscape.

Aung San Suu Kyi married in the year of 1971 to a scholar of Tibetan culture, a Brit, Dr. Micheal Aris. They had met while they were on their career at the United Nations, each representing their respective nations.

The two, although married, faced many challenges and they could not form a cohesive life together due to her political activities. While Dr. Micheal Artis was denied entry to Burma by the former Burmese dictatorship of the late 20th century, Suu Kyi was put under house arrest for the first of many times.