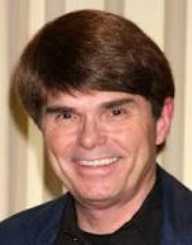 Dean Koontz was born in the town of Everett, Pennsylvania, on July 9, 1945. His father was an abusive alcoholic. Books helped him escape his difficult situation at home. In 1966, he graduated with a degree in English from the Shippensburg University of Pennsylvania. He then became an English teacher at the Mechanicsburg High School. He also worked with the Appalachian Poverty Program.

Dean Koontz started writing short stories and selling them to his relatives when he was just eight years old. In his senior year of university, he won the Atlantic Monthly Creative Writing Award for his short story, “The Kittens.” After he got a job, he spent his free time working on his writing career.

In 1968, Koontz released his first novel, called Star Quest. It belonged to the sci-fi genre. He went on to write more than a dozen sci-fi books. In the 1970s, he started experimenting with different genres, such as suspense, horror, mystery, and gothic romance. He published his work under numerous pseudonyms, like Deanna Dwyer, Aaron Wolfe, John Hill, and many others. Two of his books released during this period managed to sell over a million copies. The suspense novel The Key to Midnight was published under the pseudonym Leigh Nichols. The Funhouse was released under the pen name Owen West.

In 1980, Dean Koontz published his first successful book under his name. It was called Whispers, and it told the story of a mentally disturbed man who attacked women in Los Angeles. He followed up with a few other suspense novels, like Phantoms, Darkfalls, and Strangers. Since then, Koontz has written dozens of books. Most of them managed to rank on bestseller lists. In total, 12 of his hardcovers and 13 of his paperbacks managed to reach the first spot of the New York Times bestseller list, including The Bad Place, One Door Away From Heaven, Hideaway, What The Night Knows, and many others. In 2003, he released the novel Odd Thomas, which was the start of a popular series consisting of seven books. Overall, his books have been sold in more than 450 million copies and translated into almost 40 languages.

Several of Koontz’s books have received film adaptations over the years. They include Demon Seed in 1977, Whispers in 1990, Hideaway in 1995, and Odd Thomas in 2013. Apart from films, he has also created a few graphic novels. The best-known ones are In Odd We Trust and Nevermore Frankenstein: Prodigal Son.

In 1997, the psychologist Katherine Ramsland published a biography on Koontz. She conducted interviews with him and with the people close to him. Her goal was to explore how he created the unique plots for his books, based on events in his own life.