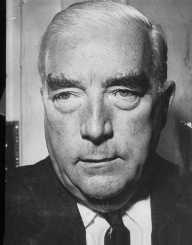 From 1939 to 1941 and from 1949 to 1966 Sir Robert Menzies served as the Prime minister of Australia. He remained in the seat for over a decade, but his second term was regarded as the longest tenure to date.

Born in a decent family, Robert wanted to become a fervent lawyer. But when he joined the Victorian Parliament he changed his career to being a promising minister. He acted as the Prime Minister in the start of World War II. Although he was forced to let go of his seat by his party, he created his party where he won the seat in 1949.

On December 20th, 1894 a couple called Kate Menzies, and James Menzies were blessed with a son in Jeparit, Australia. He was none other than Robert Gordon Menzies who took part in the family as a fourth born son. His protective father worked as a storekeeper as well as a community leader. In the mid of 1911, Robert’s father was selected to chair the Victorian Parliament seat in Melbourne. It is here that he opted to move with his family to the said location.

Robert Menzies joined Hummfray Street School, and later he enrolled at Grenville College in Ballarat. He then went to the University of Melbourne where he graduated with First Class Honors in Law early in 1916. Robert loved to study where he garnered countable of awards and scholarships. After his graduation, he landed a position at Melbourne University Magazine as an editor.

In 1918 Robert Menzies got a small job at the Victorian Bar as well as the High Court of Australia. In the process, he learned how to deal with Constitutional Law. After two years, he won a case in High Court where he was later positioned as a professional lawyer in 1929. The following year, he teamed up with Victorian Legislative Council where he represented the National Party of Australia. The same year he launched a Youth’s party that he called Young Nationalists where he acted as the president.

For three years, Robert Menzies acted as the Deputy Premier of Victoria.

During the 1930s Federal elections, Robert Menzies opted to concentrate on federal politics where he led the United Australia Party U.S. He was given a position of the Ministry of Industry as well as Attorney General.

In 1937 Robert Menzies chaired the Privy Council and the following year he acted as the Attorney-General of Australia. It was here that he introduced peaceful treaties in the government of London and other parts of the world. In 1939 Menzies was appointed as the leading leader of the UAP where he was later sworn in as the Prime Minister. Several controversies followed where he opted to create a minority government.

In the mid of 1939, the WWII began where France and Britain declared war on Germany. With the support of other parliamentary members, Robert Menzies formed Labor Party. It is in the middle of the same year that he went to Britain to discuss peaceful treaties with prominent leaders such as Churchill. He stayed there for some time, and hell broke loose when he returned home in 1941.

Robert Menzies was forced to let go of his seat. He was then persuaded to vie for Minister of Defense position. In 1943 his party emerged as a winning team, and Robert regained his leadership back.

The County Coalition was declared as winners in the 1949 election where Robert Menzies took a seat as a Prime Minister. He served for sixteen years where he won some elections. It was during this period that Australia developed economically. At 71 years of age, he opted to retire from his seat. In the mid of 1967, he was selected as the 13th Chancellor of Melbourne University. He remained in the position for five years.

Robert Menzies played a significant role during his tenure. Several treaties were signed between Australia, New Zealand and the United States followed by South East Asia Treaty Organization. During the WWI he sent his forces to Malaya, Korea, and Vietnam for one year. While still on his seat the capital of Canberra developed and he launched the Australian Universities Commission.

From 1950 to 1976 Robert Menzies received widespread of awards such as Legion of Merit, Order of Companions and Grand Cordon First Class. In the mid of 1920, Robert married the love of his life, Pattie Leckie in Melbourne. The couple was blessed with three children: a daughter and two sons.

In 1971 Robert was paralyzed on one side due to a sudden stroke. He suffered a second stroke the following year. On May 15, 1978, Robert Menzies breathed his last in his native land.