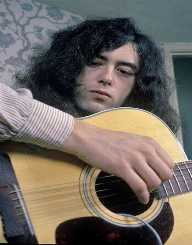 Jimmy Page was born on January 9, 1944. His father, James Page, was an industrial personal manager, and his mother, Patricia Page, was a secretary.

Jimmy Page was interested in music from an early age. He took guitar lessons when he was young before continuing on to self-teach himself new tricks. He was a fast learner and a talented man, which made him stand out in the music world. He played with small local bands while in high school. He knew then that he wanted to be a professional musician, but he decided to go to college first.

Jimmy Page attended the Sutton Art College. While at the college, he played music in the Marquee Club. He played with several bands, not sticking to one or another for very long. However, he earned popularity at his school for his impressive guitar skills. He later dropped out of the college to focus on his music.

Jimmy Page was a popular musician right out of school. He moved around a lot, playing with several different bands. He performed for a short time with The Rolling Stones in the 1960’s. In the mid 1960’s, he joined another band, Yardbirds, which he performed with until 1968 when the band broke up.

Jimmy Page helped to assemble a new band in 1968 with a singer, Robert Plant; drummer, John Bonham; and a man who could play just about anything asked of him, John Paul Jones. Together, they were Led Zeppelin. The band produced their first album, Led Zeppelin, in 1969. Some of their other famous albums are listed below.

Together the band was one of the best selling bands in the United States. They have a number of top ten and number one hit songs.The band broke up in because the drummer of the band, John Bonham, had died from asphyxiation.

After the death of Bonham, Jimmy Page didn’t play music for some time. Once he was done grieving for the loss of his friend, he went back into the music scene. He played with various bands in the 1980s, including the Firm. In the 1990s, he focused on remastering music from Led Zeppelin. He also reunited with Plan in 1994 for release No Quarter: Jimmy Page and Robert Plant Unledded.

Jimmy Page has also released some solo music, including Outrider.

Jimmy Page is known for his charitable giving. He is known to work with the Action for Brazil’s Children Trust, which he founded with his (then) wife, Jimena, in 1998. He has also been a part of countless charity concerts to raise money for a variety of good causes. Because of his charitable work, Queen Elizabeth II named him an Officer of the Order of the British Empire.

Jimmy Page is expected to have a net worth of $170 million. He would likely have more if it were not for his generous charitable donations.

Jimmy Page first married Charlotte Martin in 1970 and divorced in the 1980s. He has remarried again to Patricia Ecker in 1986 and divorced in 1995. He married for a third and final time to Jimena Gomez-Paratcha in 1995, but divorced in 2008. He has five children named Zofia, Scarlet, Jana, Ashen, and James III.