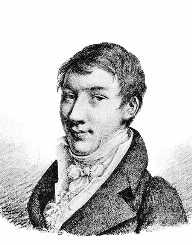 French mathematician Augustin-Louis Cauchy was one of the giants of mathematics in the 19th century. He was born in Paris, France on the 21 August 1789 to Louis-Francois Cauchy and Marie-Madeleine Desastre into a comfortable middle-class home.

Initially homeschooled, Cauchy was later a student at the École Centrale du Panthéon where he excelled in classical studies. At sixteen he entered the École Polytechnique (1805) and followed this up by studying at the École des Ponts et Chaussées.

After completing his education, Augustin-Louis Cauchy took up a position as a junior engineer in Cherbourg in 1810. During his three years in Cherbourg, he attended to his job and in his spare time worked on three scientific manuscripts.

Between 1815 and 1830 Cauchy was an adjoint professor and later full professor at the École Polytechnique. He also held chairs at the Faculté des Sciences and the Collège de France.

The July Revolution in 1830 disrupted Cauchy academic career. Because he refused to take an oath of allegiance to Louis-Philippe, he lost his various theoretical positions. Augustin-Louis Cauchy left France, and in 1833 he moved to Prague where he was involved in the education of the deposed King of France, Charles X’s grandson, the Duke de Bordeaux.

In 1838 when no longer required to take the oath of allegiance, Cauchy returned to France and was able to return to his professorship at the École Polytechnique.

Augustin-Louis Cauchy was a prolific writer who made considerable contributions in the field of mathematics. His collected works were published in twenty-seven volumes. Sixteen mathematical theorems and concepts are named after Cauchy, more so than any other mathematician (source: Berkeley University website).