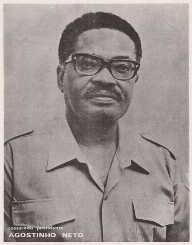 Agostinho Neto was the first president of Angola. He was important during the nation's transition from colony to country.

Agostinho Neto was born on September 17, 1922, in Icolo e Bengo in Angola. His full name at birth was Antonio Agostinho Neto. His father Agostinho was a Methodist church pastor. His mother Mary was a kindergarten teacher.

Agostinho Neto graduated from Liceu Salvador Correia in Luanda in 1944. Before he attended the university, you worked at the Portuguese Colonial Health Service. Neto earned a scholarship to go to the university paid for by the U.S. Methodist Church.

In 1947, Agostinho Neto pursued his medical studies at the University of Lisbon as well as Coimbra in Portugal. He graduated with his doctorate with a specialty in gynecology and returned to Angola in 1959.

While pursuing his medical degree, Agostinho Neto was also known as a poet and political activist. His first book of poetry was published in 1948 in the Angolan capital of Luanda. He was arrested by PIDE or the International and State Defense Police. The Portuguese security agency was aware of Neto's involvement in the national cultural movement for the rediscovery of the indigenous Angolan culture. Six years of the 1950s while he was studying in Portugal, he was imprisoned for participating in political protests.

In 1956, Agostinho Neto joined the MPLA or Popular Movement for the Liberation of Angola. He was the chairman of the group until his death. When Agostinho Neto returned to Angola after finishing his medical studies, he opened a private medical center. However, he was arrested in front of his patients in 1960 for his involvement of the opposition of the colonial power. When people protested his arrest, Portuguese police and soldiers retaliated. The result was known as the Massacre of Icolo e Bengo with 30 killed and 200 wounded. Neto was transferred to Cape Verde, then Lisbon.

During his incarceration, Agostinho Neto wrote his second book of poetry. Due to the international protests, Neto was placed under house arrest. He escaped along with his family and lived in exile in Morroco and Congo. Agostinho Neto did not stop there. He traveled the world in order to help gain supporters for the liberation of Angola. His pleas were not answered by the United States as they had oil interests in Angola. So Neto went for help from the Soviet Union and Cuba.

On April 25, 1974, the Carnation Revolution took place in Lisbon. The military coup overturned the authoritarian government. The result was that almost all of the colonies, including Angola, were granted independence in 1975. The MPLA took over the capital of Luanda and established a one-party state. They were able to do this with the help of Che Guevara and Cuba against other anti-colonial movements.

Agostinho Neto became the 1st president of the independent nation of Angola on November 11, 1975. During his presidency, he still dealt with resistance as the Fractionism movement in 1977 attempted a coup in opposition of his socialist government. The country of Angola was in the midst of a civil war in which thousands of opposition supporters were executed.

Agostinho Neto married Maria Eugenia Da Silva in 1959. The couple had two children. Neto had another child with a woman from Bulgaria. Agostinho Neto died on September 10, 1979, in Moscow, Russia at the age of 56. He was in surgery for cancer when he passed.

Agostinho Neto was an active member of the organization that opposed the Portuguese colonial rule of Angola. As the first president of the independent nation, his life and work is celebrated by the country. His birthday is a public holiday called National Heroes Day. The public university in Luanda is now called the Agostinho Neto University. His name is attached to hospital in Cape Verde as well as the airport.

Agostinho Neto was diagnosed with pancreatic cancer and liver cirrhosis. He went to Moscow, Russia for treatment in 1979. However, Neto died during the surgery.