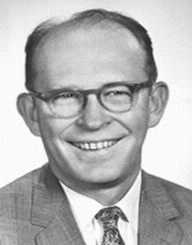 Frank Sherwood Roland was born in 1927 in Ohio. There he attended public school and got his education. As he showed extreme talent and intelligence, and the system allowed it, he received his high school graduation diploma before the age of 16.

While he was still in school, he also started to work in the summertime for a couple of summer holidays. He was working in a weather station, where he first came across systematic data collection.

Frank Sherwood Roland continued his education at a University in Ohio. He attended the Ohio Wesleyan University. He graduated before reaching the age of 18, but he instead chose to go to the Navy. In the Navy, he worked as a train radar operator. After two years and two months, Rowland was over with his duty and then resumed his studies. He attended the University of Chicago, where his subject of choice was radiochemistry.

Rowland focused his studies and thesis on cyclotron-produced radioactive bromine atoms and their chemical state. He graduated with a bachelor’s degree in 1948. He received master’s degree in 1951, followed by a Ph.D. a year later, in 1952. All of those degrees Rowland received in the University of Chicago.

Frank Sherwood Roland was teaching for four years at Princeton University, from 1952 to 1956. Later he transferred to the University of Kansas, where he stayed for longer, from 1956 to 1964. He then became a professor in the field of chemistry at the University of California in 1964.

In 1978 in California he was chosen to represent the National Academy of Sciences. Later, in 1993 he became the president of the organisation “American Association for the Advancement of Science.”

The Impact of Research

Frank Sherwood Rowland is best known for his extensive research in radiochemistry. He was the one who discovered chlorofluorocarbons contributing to ozone depletion. Frank Sherwood Rowland announced after his discovery that industrially developed gases influenced by solar radiation were decomposing in the stratosphere. This action then released vast amounts of chlorine, chlorine monoxide in the stratosphere. The release of chlorine and its monoxide in quantities that destroy ozone.

Rowland’s research paper first saw daylight in 1974, when it was published in the journal “Nature.” This research had the first real impact in 1978. That year a ban was issued towards the CFC-based aerosols in spray cans. This ban was firstly carried out in the US. It was not until 1980 when a global ban was issued.

Most of Frank Sherwood Rowland’s work focused on the atmosphere. He was not only researching the stratosphere. He researched CCI3F North-South mixing by taking and examining samples of air in cities around the world. He then discovered that CCI3F was very rapidly mixing from different hemispheres. After eight years he repeated the same experiment and concluded that CCI3F levels were increasing steadily.

Another very valuable research by Rowland was about the density of ozone layer. He discovered that the ozone layer density increased in November, and slowly decreased until April. From April to November it stayed the same density without changes. Even though this phenomenon was real throughout the years, he noticed an overall decrease in the density of ozone.

Rowland and his colleagues presented this research to the authorities, and this conclusion was able to lower the CFC emissions after several regulations were set slowly. The amount of CFC emission was regulated first in Canada, then afterward other countries followed. It reached global impact in 1989 when the Vienna Agreement and Montreal Protocol were developed.

Frank Sherwood Rowland was not only a great scientist but also a father to two children, Jeff and Ingrid. The daughter, Ingrid Rowland became an art historian. Rowland developed Parkinson’s disease very late in his life. He passed away from the complications of the disease in 2012.