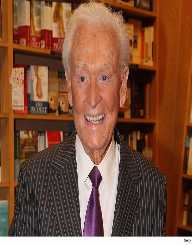 Bob Barker is an American television presenter who is best known for hosting The Price is Right.

Bob Barker was born in Darrington, Washington on 12 December 1923. Barker grew up on an Indian reservation and was listed as a member of the Sioux tribe. Barker’s parents were Matilda Valandra and Byron Barker. Barker’s mother worked as a school teacher, and his father worked as a foreman for the electrical maintenance crew. His father died in a work accident in 1929. His family then moved to Missouri, and his mother remarried. Barker attended Central High School in Springfield and gained a basketball scholarship to Drury College. His studies were interrupted by the outbreak of the Second World War. Barker enlisted in the U.S Navy and served as a pilot. After the war, he completed his degree in economics.

Bob Barker got his first break in broadcasting on a local radio station in Springfield. After graduation, he moved to Florida and again got work on a local radio station. To try and further his career Barker moved to California in 1950. In Burbank, he hosted a radio show, the Bob Barker Show, which ran for six years. He was approached by Ralph Edwards, the TV producer, and offered the position of host of the game show Truth or Consequence. Truth or Consequence ran from 1956 to 1974. The show featured difficult to answer questions, and if the contestants answered incorrectly, they had to perform an outlandish stunt.

Barker was a big success and was quickly offered another show by Edwards in 1957. The new show, End of the Rainbow, saw Barker visit people who had done charitable or community work and reward them for their efforts. In 1972, Barker landed the job as host of The Price is Right. Barker would host the show thirty-five years and became the executive producer in 1988. With Barker as host, The Price is Right became the longest-running game show in American television. Barker retired from the show in 2007.

Barker also worked on some less successful shows such as The Family Game, Simon Says, and That’s My Line. Barker was one of the first TV presenters not to dye their hair instead wearing it as its natural grey from 1980. Barker also made some guest appearances on other shows. He has appeared in three episodes of the animated comedy Family Guy. In 2000, he voiced himself in an episode of Futurama. Barker has also voiced a character in SpongeBob Squarepants. Barker was a celebrity guest host on the WWE’s Raw in 2009. Barker appeared as himself in the Adam Sandler film HappyGilmore and in a memorable scene beats up Sandler’s character on a golf course.

Bob Barker has won nineteen Emmy Awards, fourteen for Outstanding Game Show Host and five as part of The Price is Right winning Outstanding Game Show. Time Magazine named Barker the greatest game show host of all time and CBS named a studio in their Television City after Barker.

Barker married Dorothy Gideon on 12 January 1945. The marriage ended when Dorothy died of lung cancer in 1981.

Barker suffered from sciatica in 1982 and also suffered a herniated disc. In 1991, he suffered a stroke. 1999, saw Barker undergo surgery on a carotid artery. 2002 saw Barker diagnosed with skin cancer for the first time and he also underwent prostate surgery. Barker has had suffered repeated outbreaks of skin cancer, but it has never been life-threatening.

Barker has been an active supporter of animal rights. Barker became a vegetarian in 1979. Barker banned animal prizes from The Price is Right and spoke before Congress when a bill banning elephants from circuses was being debated. Barker relinquished his role as host of Miss Universe pageant when it refused to stop awarding fur prizes. Barker has raised money for animal welfare programs and neutering programmes through his foundation. Barker donated a million dollars to Columbia University for the study of animal rights. Barker also provided five million in funding to groups that try to stop Japanese whaling. Barker has also made sizable donations to PETA, who named one of their California office buildings in his honor.