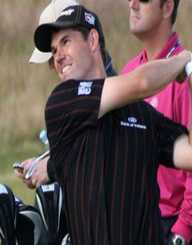 Irish professional golf Padraig Harrington was born in Ballyroan, Dublin, Ireland on the 31 August 1971 to Breda and Patrick Harrington. His father, a sportsman who had played Gaelic Football for Cork, also played a five handicap in golf; and Harrington started playing golf at a young age.

Padraig Harrington first amateur tournament was the Connacht Boys Championship (1987) where he managed to get into the final. He also finished third in the Irish Boys Close Championship at Grange Golf Club and subsequently won a place on the Irish Boys Team which participated in the Home Internationals at Kilmarnock Barassie Golf Club, Scotland.

In 2008, Harrington successfully defended his Open title and also won his first PGA Championship. He won two British Open Championships, 2007 and 2008 as well a Professional Golfers Association of America Championship (PGA) in 2008.

The US & World Golf Championship Events

Padraig Harrington won his first professional event in the US at a non-PGA tour hosted by Tiger Woods in 2002, the Target World Challenge. He was runner-up in the Players Championship in 2003 and 2004 and then earned enough on the PGA Tour as a non-member to be invited to the end of season Tour Championship.

He won his first PGA Tour at the Honda Classic in March 1995 and in June 2005, he won the Barclays Classic. He then withdrew from the 2005 Open Championship because of the death of his father.

Between 2001 and 2008, Harrington was listed in the top ten of the Official World Golf Rankings (more than 200 weeks) and was also the highest rank European golfer. He played in the Ryder Cup for Europe five times, winning in 2002, 2004 and 2006; losing in 1999 and 2008. Harrington also won the Augusta National in 2003 (with a tie) and 2004. Then in 2007, Harrington won the Open Championship by defeating Sergio Garcia at Carnoustie, this made him the first Irishman to win the Open Championship in 60 years as well as the first winner ever from the Republic of Ireland.

During the 2009 season, Padraig Harrington tied for 5th place at the Abu Dhabi Golf Championship and finished six top 10 finishes in the Us. He was placed 3rd at the Portuguese Masters and 4th at the Dubai World Championship. He finished the PGA Tour season in 7th place in the FedEx Cup and 15th in the Race to Duba. He had eight top 10 finishes in 2010 at the European and PGA Tours. He continues playing on both the PGA and European Tours.

Harrington and his wife Caroline have two sons.