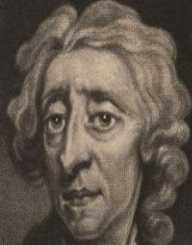 English philosopher John Locke was born on August 29, 1632, in Wrington Somerset, England. His father John was a country lawyer and a clerk to the Justice of Peace. Locke’s father and his mother Agnes were both Puritans, and he was raised in that manner. When Locke was born, he and his parents moved to Pensford, where he grew up.

Thanks to his father's connections, Locke was able to receive an excellent education. In 1647, he began attending the Westminster School in London. The school was sponsored by his father’s former commander Alexander Popham. After completing the Westminster School, Locke went on to study at Christ Church, Oxford. He was a bright student but often found the contents of his curriculum irritating. Locke was interested in the works of modern philosophers. At Christ Church, Locke became increasingly interested in medicine and experimental philosophy.

John Locke graduated from Christ Church in 1656 but continued to study for two more years to obtain his Master of Arts degree. He became the member of the Royal Society and in 1674, graduated with Bachelor of Medicine degree.

In 1666, Locke’s career took a turn when he met Lord Anthony Ashley Cooper who sought treatment for his liver infection. Locke became his physician and soon was invited to Shaftesbury’s house London as Lord Ashley’s physician. He continued to study under Thomas Sydenham’s tutelage, who became a significant influence on Locke’s philosophical thinking. When Cooper’s liver infection became life-threatening, Locke had to test his knowledge. He suggested surgery to remove a cyst, which saved Lord’s life.

Shaftesbury was the founder of the Whig movement and had a major influence on Locke’s political philosophy. When Shaftesbury became Lord Chancellor, Locke became increasingly involved in politics. However, in 1675, Shaftesbury fell out of general favor. Locke traveled to France, working as a tutor and medical attendant to Caleb Banks. In 1679, he returned to England and composed most of his Two Treatises of Government. The work was an argument against absolute monarchy and argued for individual consent.

John Locke's ideas at the time were revolutionary for the English society. In 1683, Locke was under suspicion for being involved in the Rye House Plot. For this reason, he fled to the Netherlands. He spent a lot of time writing and re-worked his previous writing Essay. During this time, Locke also wrote Letter to Toleration. After he returned from exile in 1688, he published the majority of his works. The most famous of them are Two Treatises of Civil Government and A Letter Concerning Toleration.

Shaftsbury was the most prominent influence on Locke’s political thinking since he and the Whig party pushed for a constitutional monarchy. Although his Two Treatises of Government stirred up the thought of English elite, it became more famous during the American and French revolutions. Locke became a hero for the Whig party.

John Locke became one of the members of Board of Trade which oversaw England’s territories in North America. He was a major impact on the Western thought. Locke argued for separation of Church and State, liberty, and freedom of religion. He was a major influence on Voltaire, Alexander Hamilton, and Thomas Jefferson.

In his later years, Locke’s health began to decline rapidly. Locke died on October 28, 1704. He never married and never had any children. During his lifetime he became an eyewitness to several major events, such as the English Restoration, the Great Plague of London and the Great Fire of London.