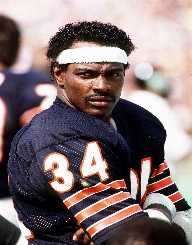 Walter Payton aka Sweetness ruled the 20th-century when it came to football industry. He was accurately known as an all-around player, a fervent pass-catcher as well as an adorable passer. That said he once had a chance to act as a quarterback for the Bears. Not to mention he was up to the mark in regards to his blocking techniques. Walter wasn’t the fastest or the largest of all; neither did he have a high-spirited speed. To maintain his nature’s given balance, he used to run with an Olympian might colliding with opponents on the way. His fan’s thought that his legs had power packs. In short, Walter was a die-hard player whose spirit entailed kicking his legs off the limit with an escort of a balanced pace. Although his life was cut short due to a sudden illness, he is still live in our midst.

Although his football career ended abruptly, Walter Payton made a stance by setting profound records. He was known for his hardworking skills and ever blazing determination. Besides, Walter was known for his courtly and out of world heart, especially his love for young teenagers. His high-pitched and soft voice spoke nothing else than good thoughts. I don’t even want to talk about his rib-cracking jokes and off-field charities. Before fame, Walter was a decent man, but he turned out to be known as Chicago Bears son. Plumbing heavily into his unbiased personality, he employed positive traits in his life. Loyalty, courageousness, and generosity ruled his world. Whether it was a competition or a simple training routine, Walter liked to win at everything. Yes, he was strong, but he despised intimidation from his colleagues. He wanted to lead and control everything at hand. He used his sporting skills to communicate and talk to people. He once acknowledged that he couldn't be possessed with his end winning. Instead of cheering on the field, he carried on like nobody’s business.

On July 25, 1954, Alyne Payton and Peter Payton were blessed with a son. He was none other than Walter Jerry Payton who spent his childhood days in Columbia, Mississippi in the U.S. Walter continued to receive more attention when he joined Jackson State University. It was here that he got interested in football field as a halfback. He was selected to join an All-America team, and after few months he was named as the Black College Player of the Year for two years. In the course of his education, Payton completed his football tenure with over 400 points and 3000 yards. He knew how to line up his field skill as well as his studies.

In the mid of 1975, Walter Payton joined the NFL Chicago Bears. His immense speed and power allowed him to earn 300 yards completion by 1977.He closed the year as the Most Valuable Player of the year. Payton continued to shine where he received not one but nine Pro Bowl selections. This allowed him to earn another period in the NFL’s season. Before the end of his career, he received a Super Bowl Ring when he led his team against the New England Patriots in 1986.

Walter retired in 1987, but he left a racing record of over 17,000 yards. He didn’t go home empty-handed; he was installed into the Football Hall of Fame in the 1990s followed by the College Hall of Fame after three years.

After serving as a football player for thirteen seasons, Walter Payton went to join the Chicago Bears Board of Directors. He then came to won a rebranded NFL franchise in St. Louis. Afterward, he created a Cart racing group in partnership with Dale Coyne. Early in 1996, Payton joined an entrepreneurial league where he opened a restaurant called Walter Payton’s Roundhouse in Illinois. In 1999 the world received shocking news when Walter announced that he had been battling with an autoimmune liver infection. It was a severe condition that eventually led to cancer of the liver. Suddenly his encouraging words struck everyone, including the unknown. His health started to show some weaknesses in 1998.

On 1st November Chicago and Walter’s fans mourned his death. Even those that hated football remembered him as an all smiles man. Walter Payton was eulogized by amicable personals including John Madden, Mike Ditka among others. The following day, the NFL gathered to remember Payton’s life. From that time onwards, heaven became his resting place. Probably he will be remembered for coming up with Walter and Connie Payton Foundation. His wife, Connie now governs the organization. His son, Jarret opted to follow his father’s footsteps. His daughter, Brittney Payton works as an NFL contributor. Despite his early passing, his kindness, compassion and humorous nature will continue to live in the minds and hearts of people around the globe.