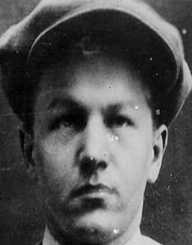 Baby Face Nelson? was one of America’s most wanted criminal in the 1930s.

Lester Joseph Gillis, nicknamed Baby Face Nelson was born in Chicago on December 6, 1908. He was the son of Belgian immigrants, Joseph and Mary Gillis. Nelson was the seventh born child of the family. He grew up in a financially handicapped family in Chicago. His father worked as a low-income earner in a tannery.

Nelson started having trouble with the law at a tender age. He was arrested in July 1914 at the age of seven for shooting a childhood friend. He was taken to a state-approved reform center for twelve months. In his twelfth year, Nelson had experience in the world of violent crime. He was an established auto hijacker. He formed a street gang of juveniles who ruled the criminal activities in the neighborhood. At the age of thirteen in 1921, Nelson was arrested by the police. As a minor, he was taken to a state juvenile reformation center for one year.

After his release, Nelson went back to criminal activities. In 1922, a few weeks after his return, he was rearrested by the authorities. He was convicted for partaking in criminal activities on the streets of Chicago. This time the juvenile court sent him to a penal school. He spent 18 months in St. Charles School for Boys in Chicago. Nelson had constant fights with his schoolmates due to a hot temper.

His father committed suicide while he was incarcerated in St. Charles. Upon his release, he started supporting his family using the crime proceeds. Nelson spent the early years of his teenage life slipping in and out of state correctional facilities.

Nelson was nicknamed Baby Face Nelson by his associates in crime. He had youthful looks and small physical stature. He got employed at Standard Oil Station, a neighborhood filling station in Chicago in 1928. He married in the same year. Car thieves and other criminals frequented the station. Nelson became part of an underworld network. At the beginning of the 1930s, he was part of the Touhy Gang in Chicago. They raided rich homes and carjacked the rich on the roads. They used adhesive tapes to bind the hands and gag the mouths of their victims. The police profiled them as The Tape Bandits.

He graduated into the more lucrative bank robbery in April 1930. He raided the Itasca State Bank on April 21, 1930. Nelson was 22 years. He escaped with USD 4,600. A few days later, Nelson raided the home of Chicago Mayor Bill Thompson. Nelson robbed the mayor’s wife jewelry worth USD 18,000.

On November 26, 1930, Nelson killed his first robbery victim. He murdered Edwin Thompson during a robbery raid on a local tavern on Waukegan road in Chicago. He was arrested and jailed. He escaped from prison during a prison transfer from Joliet State Penitentiary. He kept a low profile at the home of another criminal William Graham. Nelson assumed another alias Jimmy Johnson to avoid detection. He teamed up with Eddie Bentz and robbed a local bank in Michigan on August 18, 1933.

Nelson formed his own gang after a spate of bank raids. He raided the first National Bank on October 23, 1933. He escaped with USD 32,000. He escaped with his gang to Texas. He escaped a police dragnet and fled again to San Francisco Bay Area. He teamed up with Fatso Negri and John Chase. The trio committed several bank robberies before taking a low profile.

On April 22, 1994, the FBI raided the Little Bohemia Lodge in Wisconsin. Nelson, his family, and gang members were lodged at the facility. The gang escaped after a fierce gun battle. An FBI agent and a civilian died, while four other FBI agents were seriously wounded. The FBI profiled Nelson as a high priority target. He continued raiding banks despite the FBI manhunt. He fled to California for a while and returned to Chicago when the FBI had cooled off the manhunt. The reunion never lasted for long. In July 1934, Dillinger was killed by the police. In October, the police killed gang member Pretty boy Floyd. The FBI declared Nelson their prime target.

On November 27, 1934, Nelson and his gang engaged the FBI in a gun battle at Lake Como Inn in Wisconsin. They escaped prompting a chase. They engaged in another gun battle in Barrington. Two officers died. Nelson died afterward of multiple gunshot wounds. His wife Helen surrendered to the police.