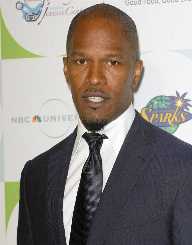 Jamie Foxx was born on December 13, 1967, in Terrell, Texas, USA. His parents are Louise Dixon and Darrell Bishop. Sadly, his parents divorced when he was an infant, so he was raised by his grandparents. His sisters are Deidra and Diondra Dixon.

As a teenager, Jamie Foxx attended Terrell High School. While here, he was a member of the football team as well as an avid music fan. He would often play the piano in his free time. Because of his musical skills, he was offered a scholarship to attend the United States International University. He took up the opportunity and studied composition while at the university.

Jamie Foxx’s television acting career began in 1991 when he earned a role on the skit comedy show In Living Color. While working on this show, he also held the role of Crazy George in the show Roc, which he stopped working within 1993. His role on In Living Color ended in 1994. From 1996 until the end of the 1990’s, Jamie Foxx transitioned from working on television shows to working in film. Some of the films he was in during this decade include The Great White Hype, The Players Club, and Held Up. Also in 1996, he created his television show, The Jamie Foxx Show, which aired until 2001.

In the 2000’s, Jamie Foxx focused primarily on working in film, instead of on television. During this decade, his fame rose much faster than it had in the 1990’s. He was soon earning lead roles in films like Ray. Some of the other major motion pictures he had a role in during the 2000’s include Shade, Collateral, Jarhead, Miami Vice, Dreamgirls, The Kingdom, and The Soloist.

As the 2010’s progress, Jamie Foxx continues to take on leading roles in popular films in Django Unchained. He has also recently taken to voice acting in the films Rio and Rio 2. Some of the other films that he has recently acted in include Horrible Bosses, The Amazing Spider-Man 2, Annie, Baby Driver, and Sleepless.

Foxx’s music career began in 1994 when he released his first album: Peep This. This album was moderately successful. However, it would be over a decade before he would lease another album because of his busy acting schedule.

Foxx’s second album, Unpredictable, was released in 2005. This album was much more successful than this first album, eventually reaching the number one spot on the US Billboard top 200 chart. Another one of Foxx’s albums from this decade was Intuition, which was released in 2008.

Foxx’s most recent album was released in 2010 (Best Night of My Life). This album as more successful than his first album, but not as successful as his second. At the album’s most famous point, it reached number 6 on the US Billboard top 200 chart.

Over the course of his decades-long acting career, Jamie Foxx has won over three dozen awards and has been nominated for more than six dozen others. Some of his most impressive acting awards are listed below.

Jamie Foxx also has some music awards, some of which are listed below.

While Jamie Foxx has never been married, he has two children with two women who he has had romantic relationships in the past. His children’s names are Corinne and Annalise. The girls also have almost 20 years between the two!