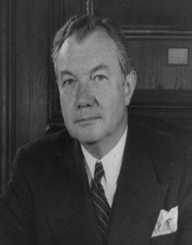 Robert Houghwout Jackson was born 13th February 1892, to William and Angelina Jackson. He was born in Spring Creek, Pennsylvania, in the United States.

Jackson studied at Frewsburg High School and graduated in 1909. He then spent a year as a post-graduate student studying at Jamestown High School.

He had decided to pursue a legal career, and at that time it was not necessary to study at college or law school if a student learned directly from a practicing attorney. Jackson’s uncle, Frank Mott, was a partner in a law firm in New York, so Jackson began his career studies. He was introduced shortly after to Franklin D. Roosevelt, who was a member of the New York State Senate.

In 1911, Robert H. Jackson began studying at Albany Law School of Union University. He attended for two years and successfully received his certificate in 1912. In 1913, Jackson passed the bar.

Robert H. Jackson began working after he passed the bar, and in 1917, joined Penney, Killeen & Nye, a prestigious firm in Buffalo. In 1918, he was headhunted and returned to Jamestown as the city’s corporation counsel. He built a successful legal practice over the next 15 years, and he had a reputation in New York State as one of the best attorneys practicing. In 1930, Jackson joined the American Law Institute, and in 1933, he was appointed Chairman of the American Bar Association’s Conference of Bar Association Delegates.

Jackson also continued his friendship with Roosevelt, and when Roosevelt was Governor of New York, Jackson was appointed to a commission where he was assigned to review the state judicial system and make recommendations on any necessary reforms. Roosevelt also wanted Jackson to join the public service, but Jackson declined as he wanted to stay in private practice.

He became active in Roosevelt’s 1932 presidential campaign, and when Roosevelt won in 1934, Jackson agreed to join the president’s staff. His first role was Assistant General Counsel of the U.S. Treasury Department’s Bureau of Internal Revenue. He managed 300 attorneys about cases before the Board of Tax Appeals.

In 1936, Robert H. Jackson moved into the role of Assistant Attorney General in charge of the Tax Division of the Department of Justice. In 1937, he was Assistant Attorney General in charge of the Antitrust Division. In March 1938, Jackson was appointed United States Solicitor General. He served in the position until January 1940, during which time he argued 44 cases to the Supreme Court and won 38 of them.

Robert H. Jackson was in the role until 1954 and was involved in many important cases during that time. One of them was a ruling that overturned a school regulation that made it compulsory for students to salute the flag, another was during the war when Jackson came up with a three-step test to evaluate claims of Presidential power. This opinion is still one of the most widely cited in Supreme Court history.

In 1916, Robert H. Jackson married Irene Alice Gerhardt. The couple had two children, a son, and a daughter. They were still together at the time of Jackson’s death.

Jackson had a massive heart attack on 30th March 1954. He was released from the hospital on 17th May and returned to court, where his last day as Justice was 4th October 1954.

On 9th October 1954, Jackson had a myocardial infarction and died.

The Robert H. Jackson Center in Jackson’s hometown of Jamestown, New York, has guided tours for visitors and includes exhibits from Jackson’s life.