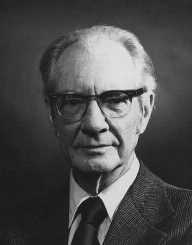 Fred Whipple was an American astronomer, inventor, and professor.

Fred Lawrence Whipple was born in the town of Red Oak, Iowa, on November 5, 1906. His father’s name was Harry and his mother’s name was Celeste. He suffered a case of polio at the age of five. He had a little brother who died at a very young age. When he was fifteen years old, he relocated to California with his parents.

Whipple began his higher education at Occidental College, a Presbyterian college in Los Angeles. He later transferred to the University of California at Los Angeles. He majored in mathematics and obtained his bachelor’s degree in 1927. He then started studying astronomy at the University of California at Berkeley. There, he earned both his master’s degree and his doctorate.

In 1931, Whipple started working at the Harvard College Observatory. There, he studied meteors and discovered several comets and asteroids. He invented a device to trick enemy radars during World War II. From 1949 to 1956, he served as Chairman of the Harvard Department of Astronomy. From 1950 to 1977, he worked as a professor at Harvard University. From 1955 to 1973, he was the Director of the Smithsonian Astrophysical Observatory. He wrote A Comet Model, a series of papers that he published in Astrophysical Journal. He invented the Whipple shield, a shield that protects spacecraft from debris. He worked on artificial satellites and took part in Operation Moonwatch. In 1980, he appeared in the documentary Target Earth. In 1986, he appeared on BBC for the coverage of the Halley’s Comet.

The American Geophysical Union named an award after Whipple. He was the first recipient of that award in 1990. An asteroid discovered in 1975 was named the 1940 Whipple. An observatory in Arizona was also named after him.

From 1928 to 1935, Whipple was married to Dorothy Woods. They had a son named Earle Raymond. He later married Babette F. Samelson. They had two daughters, named Sandra and Laura.