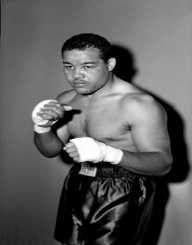 Joe Louis was an American boxer who was the longest reigning world heavyweight champion and nicknamed the ‘Brown Bomber.’

Joe Louis was born Joseph Louis Barrow just outside Lafayette, Alabama on 13 May 1914. Louis weighed in at eleven pounds at birth. His parents were both the children of former slaves, Munroe and Lillie Barrow. Louis’ parents, worked as sharecroppers and had eight children together. When Louis’ was two his father was institutionalised in a mental hospital. It was reported to the family that his father died in 1920, but he, in fact, survived until 1938. His mother remarried in 1920. The family was harassed by the Ku Klux Klan and moved to Detroit. Louis for a time worked at the Ford Motor Company.

Joe Louis began boxing as a means to escape the poverty that was brought by the Great Depression. Louis enjoyed an amateur record of fifty wins and four losses. He won the Detroit and Chicago Golden Gloves competitions, and in 1934 Louis won the U.S amateur boxing championship. Louis had competed at the light heavyweight division at the amateur level, as a professional he competed in the heavyweight weight class.

Louis began his professional career in Chicago on 4 July 1934. In his first professional bout, Louis won the match against Jack Kraken by way of first-round knockout. In the first year of his professional career, Louis won twelve fights. Despite continued success, Louis suffered due to his race. The first Black heavyweight champion, Jack Johnson, had been deeply unpopular with white Americans and no African American had received a heavyweight title shot since.

Joe Louis' management carefully crafted Louis media image in an attempt to land him a title shot. Louis continued winning bouts and became a famous figure when he defeated the giant Italian boxer, Primo Carnera. Boxing at the time was starved of celebrity fighters, and Louis managed to capture the imaginations of some for beating Carnera who was from fascist Italy. Despite this Louis still faced a racist backlash with many in the media touting Max Baer as the white hope before his bout against Louis. Louis though knocked Baer out in the fourth round. With a record of 27-0 Louis was considered the number one contender.

In 1935 Louis faced Max Schmeling, a former champion. Schmeling was not considered a threat to Louis. Louis was trained poorly for the fight and often indulged in rounds of golf. It has been rumored that former champion Jack Johnson offered to train Louis but was rejected and in response went to the Schmeling camp. It is claimed it was Johnson that highlighted Louis’ propensity to drop his left guard after a jab. Schmeling did study hours of film on Louis before the fight and utilised the right cross to knock Louis out in the twelfth round eventually.

Despite the loss, Joe Louis was presented with a title fight against James Braddock. The title match was controversial after the defeat, but many did not want the title to fall into Nazi hands. Lewis won some fights before the title bout on 22 June 1937 The African American population of America thronged the city streets across the nation celebrating wildly as Louis became world heavyweight champion, knocking Braddock out in the eighth round. Louis became a beloved hero of the downtrodden black community during the Great Depression.

Louis defended his belt in Yankee Stadium against British boxer Tommy Farr. Louis won on points after fifteen gruelling rounds. The stage was then set for a rematch with Schmeling. The fight took on heightened importance as Schmeling had been hijacked by Nazi propaganda, who portrayed him as the champion of the Aryan race. Schmeling did not share the Nazi philosophy and refused to fire his Jewish manager. Louis was conversely promoted as an American hero and was invited to the White House before the bout. Louis attacked Schmeling relentlessly in the first round, and Schmeling’s corner threw in the towel after just two minutes and four seconds. The fight was broadcast around the world and had an attendance of over 70,000.

Joe Louis breezed through a series of title defenses until 1941 when he faced light heavyweight champion, Billy Conn. Conn refused to gain weight for the fight and Louis not wanting to appear oversized decided to do cardio and dehydration training before the bout. The exercise left Louis exhausted, and Conn dominated the first twelve rounds. However, he continued to fight on the inside allowing Louis to knock him out. America’s participation in World War II ended talks of a rematch.

Joe Louis enlisted as a private during World War II and was used to raise troop morale fighting exhibition bouts for the troops based in Europe. The Army also used Louis in propaganda aimed at enlisting young black men. Despite his fame and work Louis still encountered racism in the Army. The American armed forces were still segregated at this time. Louis had worked as an advisor to the army dealing with racial issues before he enlisted. The media in America did stop titling Louis as a black boxer at this time instead labelling him an American hero. Louis reached the rank of technical sergeant.

Joe Louis fought a couple of bouts to alleviate is debts before retiring in 1949. Louis continued to suffer financial troubles. Louis was poorly educated and had left the business side of his career to his management team, who took the lion’s share of the profit from his career. Louis also gave generously to his family and the city of Detroit. Louis was forced to make a comeback in 1950. This ended after Louis was knocked out by the undefeated Rocky Marciano.

Louis was hugely indebted to the IRS and was forced to depend on the help of former boxers Jack Dempsey and Max Schmeling. Louis was eventually able to arrange a deal with the IRS that allowed him to live out a comfortable retirement.

Joe Louis' first wife Marva Trotter had two children together Jacqueline and Joseph. They divorced in 1945 and remarried in 1946. They divorced again in 1949. Louis’s second marriage, to Rose Morgan, was annulled after less than three years. His final marriage to Martha Jefferson produced four children, Joseph, John, Joyce, and Janet. Louis also engaged in some affairs.

Louis had mental illness and drug abuse in his later life. Louis also faced some cardiac issues. Louis died on 12 April 1981 of cardiac arrest. Louis became a figure of scorn by members of the black community as they became more hostile towards oppressive America that Louis had been a spokesman for. Muhammad Ali contrasted his refusal to accept the Vietnam Draft with Louis’ propaganda during the Second World War.

Joe Louis was the first African American to take part in a PGA Tour event in 1952. This led to an eventual change in PGA white only laws and Louis supported some early black professional golfers. Louis holds the record for longest reign of a heavyweight champion at twelve years. Louis was awarded the Legion of Merit for his work during World War II.