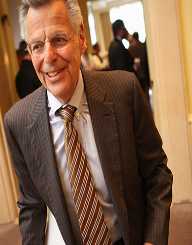 Myron Scholes is an astute Canadian-American financial economist and a Nobel Prize winner. Scholes is a co-inventor of the Black-Scholes options pricing model. Born on July 1, 1941, he shared the Nobel Memorial Prize in Economic Science with Robert C. Merton for their work on derivative pricing,Myron Scholes model in 1997. Another collaborator of the work Fisher Black had died in 1995.The Black-Scholes method provides an abstract structure for valuing options like calls or puts and other derivatives. Myron Scholes is a Nobel Laureate in Economic Sciences and a Frank E. Buck Professor of Finance, Emeritus, at the Stanford Graduate School of Business. He works with Stamos Capital Partners as the chairman of the Board of Economic Advisers.

Myron Scholes was formerly the chairman of Platinum Grove Asset Management, American Century Mutual Fund board of directors, Cutwater Advisory Board and Dimensional Fund Advisors board of directors. Myron Scholes was also a managing director at Salomon Brothers and principal and limited partner at Long-Term Capital Management, L.P. Myron served as the director of the Center for Research in Security Prices, an Edward Eagle Brown Professor of Finance at the University of Chicago, professor of finance at MIT’s Sloan School of Management, senior research fellow at the Hoover Institution

Myron Scholes was born on July 1, 1941, in Timmins, Ontario to Jewish parents who had moved to the country during the Great Depression. The family later moved to Hamilton, Ontario. Myron Scholes was academically inclined and his vision impairment during his teen years never discouraged him from achieving his vision. Myron Scholes, however, underwent an eye surgery to correct the defections at age 26. Myron’s family influenced his interest in economics family during his early years as he helped his uncle in his business. While in high school, his parents helped him to open an account to be used in investing in the stock market.

Myron Scholes enrolled at the McMaster University for his undergraduate studies and graduated with a Bachelor degree in 1962. While there, a professor at the University,introduced him to the works of later Nobel Prize award winners, Milton Friedman and George Stigler who were an economist at the University of Chicago. Myron Scholes then enrolled at the University of Chicago to pursue his graduate studies. During this period, he met Richard Roll and Michael Jensen who were his colleagues. Myron Scholes also had the opportunity to study with Merton Miller and Eugene Miller, who were at the time developing a new field of financial economics. In 1964, he received his MBA at the Booth School of Business and his PhD in 1969 supervised by Eugene Fama and Merton Miller.

After receiving his Ph.D. in 1968, Myron Scholes joined the MIT Sloan School of Management. While there, he became friends with Fischer Black, a consultant for Arthur D. Little and later with Robert C. Merton who also joined MIT in 1970. The three collaborated to embarked on many research in asset pricing including their famous work on option pricing model which became the Black-Scholes model. Myron Scholes also continued to collaborate with Merton Miller and Michael Jensen. Myron Scholes left for the University of Chicago Booth School of Business in 1973 in order to work with Eugene Fama and Merton Miller. While there, Myron Scholes worked also worked with the Centre for Research in Security Prices to help develop and assess the database if high-frequency stock market data. Myron Scholes moved to the Stanford University in 1981 until 1996, when Myron Scholes ended his academic career. While there, he focused on the economics of tax planning in corporate finance and investment banking.

Myron Scholes has since become the Frank E. Buck Professor of Finance Emeritus at Stanford University. Myron Scholes shared the Nobel Prize in Economics with Robert C. Merton in 1997 for their work on a model to determine the value of derivatives. A collaborator of this work, Fisher Black had died in 1995 before the award was given, hence, was not eligible for the award. Myron Scholes wrote the article; Not All Growth is Good in The 4% Solution: Unleashing the Economic Growth America Needs in 2012.

Myron Scholes became more involved in the financial markets from 1990. With this, he served as a special consultant for Salomon Brothers and became the managing director and co-head of the company’s fixed-income-derivative group. He collaborated with a former vice-chairman and head of bond trading at Salomon Brothers, John Meriwether and Robert C. Merton to found the hedge fund, Long-Term Capital Management (LTCM) in 1994. The fund became very successful in its first years as it realized an annual return of 40% on its operational investment capital of $1 billion. LTCM, however, suffered a downturn after the Asian financial crises in 1997 and that of Russia financial crises in 1998 as it lost 4.8 billion in less than four months in that year leading to its collapse. This scenario became one of the important examples of risk potential in the investment industry.

Myron Scholes has since 2014 worked with Janus Henderson Capital Group as the chief investment strategist. His role at the firm is to lead its evolving asset allocation product development efforts and collaborates with the investment team to develop macro risk management and disciplined portfolio construction and quantitative analysis specific to hedging. Myron is a board member of the Dimensional Fund Advisors and Chicago Mercantile Exchange. He is also the chairman of the Board of Economic Advisors of Stamos Capital Partners.