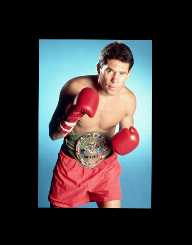 Julio Cesar Chavez Gonzalez was born 12th July 1962, in Obregon, Sonora, Mexico. He was one of ten children, with five sisters and four brothers. Chavez’s father worked for the railroad, but the family was very poor.

In September 1984, Julio Cesar Chavez won his first championship. It was the WBC Super Featherweight title. His opponent, a fellow Mexican called Mario Martinez, had been the hot favorite, but he was knocked out by Chavez.

In November 1987, Julio Cesar Chavez moved up a division to Lightweight. His first fight was against Edwin Rosario, the WBA Lightweight Champion. Chavez won the fight, which was a surprise to many. He then went on to successfully defend his title on multiple occasions.

Julio Cesar Chavez won against Meldrick Taylor in March 1990, which unified the titles. (Taylor had been the IBF Light Welterweight Champion). Over the next two years, Chavez went on to win several fights, some of which were to defend his title, which he did successfully. He defended his Light Welterweight title 18 times, after which he moved up another division, to Welterweight.

1987:   Awarded Fighter of the Year by the Boxing Writers Association of America:   2011:  Inducted into the International Boxing Hall of Fame

Julio Cesar Chavez did struggle with drug addiction and alcohol during the later part of his career, but is great to see that he has overcome his addictions. He has been sober for quite some time, and continues to stay in shape by training.