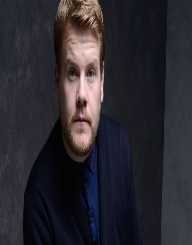 James Corden is a Tony Award-winning British actor and host of The Late Late Show. He is also the creator of Gavin and Stacey – a favorite British TV show. Corden has also worked in several other TV shows like Boyz Unlimited and Fat Friends.

James Corden was born in Hillingdon, Uxbridge, England on August 22, 1978. His star sign is Leo. His father was a musician in the Royal Air Force England, and his mother was a social activist. Corden grew up in Hazlemere. Right from his childhood, James Corden wanted to become an entertainer – through the performing arts. He got the opportunity in his teenage years. When he was eighteen, he played a part in the musical Martin Guerre.

James Corden was studying at the Jackie Palmer School then – where he learned to sing and to dance. He has two sisters – Andrea (older) and Ruth (younger).

James Corden tasted success early with Martin Guerre. He then appeared in Boyz Unlimited and had a minor role in Teachers. Corden became a familiar face on TV as he appeared in several commercials at the time. James Corden appeared in minor roles in a few films but the game-changing moment to his career came when he started appearing as Jaime Rymer in Fat Friends.

James Corden played this role for close to five years and became extremely popular for his portrayal of the character. He then appeared in The History Boys. In 2007, he started his sitcom Gavin & Stacey – a comedy show that went on to win multiple awards over the years.

His career outside of Gavin and Stacey, however, was on a plateau. He along with his co-star Matthew Horne created Horne & Corden, but it was a flop. The film Lesbian Vampire Killers also attracted very few viewers. After a string of setbacks, fortune struck again when he delivered an outstanding performance on Broadway with – One Man, Two Guvnors. In 2012, he hosted the Brit Awards. He also appeared in the Hulu series The Wrong Mans.

In 2014, James Corden succeeded Craig Ferguson as the host of The Late Late Show. He has interviewed an array of stars including Tom Hanks, Katie Couric, Mariah Carey, David Beckham and Adele. His carpool karaoke with Adele was the most viral video on Youtube in 2016.

In 2017, James Corden came under fire for making jokes about Harvey Weinstein’s sexually predatory behavior with many actresses. Weinstein had apparently raped, molested and sexually abused several actresses in the past. Corden’s jokes about the topic backfired, and many celebrities took to Twitter to show their disrespect and disgust towards him. He later issued an apology and clarified that he wanted to mock Weinstein and not the victims.

James Corden has four Emmys and several nominations to his credit. He has also won a Britannia Award and a Tony award. He was also awarded the Writer’s Guild of Great Britain award for Gavin and Stacey.

James Corden is married to Julia Carey. They tied the knot in 2012. Julia is a friend of Dominic Cooper – costar and previous roommate of Corden. Corden and Julia have two kids – a son named Max and a daughter named Carey. Currently, they are expecting their third child. Corden is a football fan and supports West Ham United.