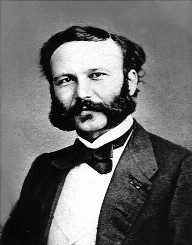 Francois Auguste Victor Grignard was born on May 6, 1871, in Cherbourg, France. He was born to Theophile Henri Grignard who was a marine carpenter and his wife. He studied in local schools from 1888 to 1887. In 1889, he joined the Ecole Normale Special School in Cluny. After the school was closed, he was transferred to the University of Lyons in its Faculty of Sciences Department. In 1892, he went to fulfil his military service and came back to Lyons in 1893. In 1894, he earned his 'Licencie es Sciences Mathematiques’ degree.

In 1894, Francois Auguste Victor Grignard joined the Faculty of Sciences at the University of Lyon where he worked with French scientist Louis Bouveault. He was later promoted to preparateur and became associated with French organic chemist Philippe Barbier. In 1898, he became ‘chef des travaux pratiques.’ In the same year, he penned his first paper along with Philippe Barbier. His early research was of branched unsaturated hydrocarbons. He also researched organomagnesium compounds.

Francois Auguste Victor Grignard later developed the use of reagents which played a significant role in organic synthesis. In 1935, 6000 papers were published, that is, after his death which showed applications of the ‘Grignard reaction.’ His other research works include catalytic hydrogenation and dehydrogenation procedures, the composition of unsaturated compounds with the aid of quantitative ozonization and breaking up of hydrocarbons in the presence of aluminum chloride.

In 1917, Francois Auguste Victor Grignard went to the United States where he participated as a chemical representative of the ‘Tardieu Committee.’ After World War I, he went back to Nancy. In 1919, he went back to the University of Lyon as a professor in General Chemistry, a post he held until 1935. In 1935, his work ‘Treatise on Organic Chemistry’ was published. In 1921, he was appointed the director of Ecole de Chimie Industrielle de Lyons’ a post that he held until 1935. In 1929, he was inducted as dean at the Faculty of Sciences at the University of Lyon.

In 1910, Francois Auguste Victor Grignard married Augustine Marie Boulant with whom he had two children, a son, and a daughter. His son, Roger Grignard was also a chemist. He died on December 13, 1935, in Lyon, France.