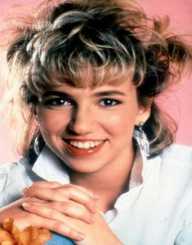 Deborah Ann Gibson was born in the borough of Brooklyn, New York, on August 31, 1970. Her parents were Joseph and Diane Gibson. She had three sisters, named Denise, Michelle, and Karen. She attended the Sanford H. Calhoun High School in Merrick, New York.

At the age of 16, Debbie Gibson sent a demo of her song “Only in My Dreams” to an executive at Atlantic Records. Atlantic soon signed a deal with her, and she went on a tour of clubs across the country. Her mother accompanied her as her manager. In 1987, she released Out of the Blue, her first album. One of the singles on the album, “Foolish Beat,” set a record for her. She became the youngest artist to have produced, written, and performed a number-one single on the Billboard charts.

Debbie Gibson filmed her first music video for the single “Shake Your Love.” In 1989, she released her second album, titled Electric Youth. It featured singles such as “We Could Be Together” and “No More Rhyme.” In 1990, she released the album Anything Is Possible. In 1991, she was part of the supergroup that sang the charity single “Voices That Care.” In 1993, she released her fourth album, titled Body Mind Soul. Her single from this album, “Losing Myself,” became her last appearance on the Billboard Hot 100 chart. After this, she was released from her contract with Atlantic Records.

Debbie Gibson signed with the label SBK Records in 1995. She released a contemporary album titled Think With Your Heart. The album achieved some success in Japan and South Africa. She soon founded her record label, Espiritu. She released her sixth album, Deborah, in 1997. It featured the singles “Only Words” and “Naturally.” In 2001, she released her seventh album, called Mind Your Business. It featured the singles “What You Want” and “Wishing You Were Here.” In 2005, she toured with the O’Neill Brothers. After this, several of her old singles became popular again on certain radio stations. In 2010, she released the album Ms. Vocalist. The album featured many Japanese artists and covers of Japanese songs.

Debbie Gibson made her stage debut in 1992, playing Eponine in the Broadway production of Les Misérables. She then played Sandy in the London production of Grease. She continued starring in plays such as Funny Girl, Beauty and the Beast, Gypsy, and Joseph and the Amazing Dreamcoat. She had small roles in the comedy films. My Girlfriend’s Boyfriend and My Ex-Girlfriend's Wedding Reception. She had cameos in the TV shows Street Justice, Step by Step, Kidsongs, and Beverly Hills, 90210.

Debbie Gibson continued her stage roles, appearing in the plays Cinderella, Chicago, Cabaret, Company, and The King and I. She starred in the films Soulkeeper, Coffee Date, and Rock of Ages. She also starred in the TV movies Celeste in the City, The Music in Me, Summer of Dreams, and Wedding of Dreams.  She took part in the sci-fi films Mega Shark Versus Giant Octopus, Mega Shark Versus Mecha Shark, and Mega Python Versus Gatoroid. She was a contestant on the shows Dancing with the Stars and Celebrity Apprentice. She was a judge on the musical shows American Juniors and Sing Your Face Off.

Debbie Gibson was engaged to music executive Jonathan Kanterman. Since 2008, she has been in a relationship with Rutledge Taylor, a doctor. Over the years, she has been the target of several stalkers, such as Robert Bardo, Michael Falkner, and Jorge Puigdollers. She has been battling Lyme disease since 2013, and she has admitted to using drugs during her youth.