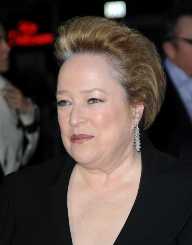 American actress Kathleen Doyle Bates was born on June 28, 1948, in Memphis, Tennessee. Her father was a mechanical engineer and her mother, a homemaker. Kathy has two older sisters. One of Bates ancestors, Finis L. Bates, emigrated to the U.S. from Ireland and served as the doctor of president Andrew Jackson.

Bates attended White Station High School and later went to Southern Methodist University, which she graduated in 1969. Bates majored in Theatre. After graduation, she moved to New York to pursue a career in acting.

Bates started out her career by appearing on several Broadway plays, like Fifth of July and Come Back to the Five and Dime, Jimmy Dean, Jimmy Dean. In 1983, she was nominated for the Tony award for her role in the Pulitzer Prize-winning play ‘night, Mother. One of her most successful off-Broadway production was in Frankie and Johnny in the Clair de Lune. The production ran for 533 performances, and Bates won the Obie Award for best performance.

Bates film career began in 1971 when she was cast in the Milos Forman comedy Taking Off. In 1978, she starred alongside Dustin Hoffman in the film Straight Time. She also starred in NBC’s soap opera The Doctors. In 1990, Bates starred as an obsessed fan Annie Wilkes, who holds her favorite actor captive in the thriller Misery. For the role, she won her first Academy Award nomination.

The highest earning movie Bates starred in was James Cameron’s film Titanic. Bates played the role of Molly Brown in the film. Titanic went on to earn an estimated $1.8 billion in box-office receipts worldwide.

In 1998, Bates played the role of political advisor Libby Holden in the drama Primary Colors. For her performance, Bates received her second Academy Award nomination. She received her third nomination for the role in the movie About Schmidt in 2002.

Bates has won the Emmy Award two times, but she has been nominated for a total of 12 times. Her first nomination was for her role as Jay Leno’s manager in HBO’s The Late Shift. She receives an Emmy award for her role in HBO’s Six Feet Under in 2003.

In the 1990s, Bates started her career as a director. She has directed several episodes of NYPD Blue, Oz and Six Feet Under. She also directed the 2006 movie Have Mercy. In 2008, Bates teamed up again with Leonardo DiCaprio and Kate Winslet on Revolutionary Road.

In 2012, Bates made an appearance on Two and a Half Men episode “Why We Gave Up Women.” For her role, Bates won a Primetime Emmy Award. Since 2013, Bates has starred in the American Horror Story series. She has appeared in 4 seasons of the show.

Bates is also the Executive Committee Chair of the Actors Branch of the Academy of Motion Picture Arts and Sciences Board of Governors. In 2014, she became a spokesperson for lymphedema. She received a star on Hollywood Walk of Fame in 2016.

Bates has been married one time. In 1991, she married Tony Campisi, which she saw for 12 years. The marriage lasted for six years, until 1997.

In 2003, Bates was diagnosed with ovarian cancer. She has successfully battled the disease. In 2012, she announced via Twitter that she had been diagnosed with breast cancer. Bates underwent a double mastectomy. She joined the 2014 New York Walk for Lymphedema % Lymphatic Diseases. She announced that after her surgery, she has been suffering from lymphedema in both arms. She became the national spokesperson for Lymphatic Education & Research Network and has been an active advocate for the cause.