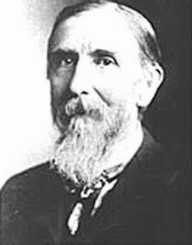 Milton Bradley was an American entrepreneur, publisher, and game pioneer. Born on Novembers 8, 1836, he is mostly credited for pioneering the board game industry, with his company, Milton Bradley Company.

He released his board game The Checkered Game of Life in 1860, to huge financial success, as it became very popular with its concept of teaching both moral virtues and vices.

Milton Bradley was born on Noveborn on November 8, 1836, in Vienna, Maine to Fannie (Lyford) and Lewis Bradley. The family relocated to Massachusetts in 1847, where Bradley grew up. Bradley completed high school in 1854, after which he worked as a draftsman and patent agent. Milton continued his education at the Lawrence Scientific School in Cambridge, Massachusetts. He, however, left without graduating, following his family to Hartford, Connecticut.

Unable to find any better job, he left home for Springfield, Massachusetts in 1856, where he gained employment in the locomotive works of the Blanchard & Kimball (later Bemis & Company).

The company went liquid during the 1858 recession; he became a mechanical draftsman and patent agent. In 1960, he established the first color lithography shop in Springfield, Massachusetts after learning lithography in Providence, Rhode Island the previous year. His lithography business later failed after printing the image of the then-presidential nominee, Abraham Lincoln.

The project was initially a success, but a later change in Lincoln’sappearance, by growing his beard, after Bradley’s print made the image a misrepresentation. This made a customer demand for his money back, rendering the printed images a waste.

The Checkered Game Of Life

Milton Bradley had developed an idea for a board game he called The Checkered Game of Life, which he decided to roll out after the failure of his lithography business. He had been inspired by an imported board game given to him by a friend.

The first The Checkered Game of Life was released in 1860. It became an instant success with its radical concept of teaching both morals and vices. This was even more popular because a predecessor Mansion of Happiness created in Puritan, Massachusetts, only promoted moral merits.

He founded the Milton Bradley Company to produce the games. The company founded in 1860, became the biggest producer of American games in the 20th century. Games produced by the company included The Game of Life, Battleship, Candyland, Easy Money, and Operation. Milton Bradley Company is now a subsidiary of Hasbro based in Pawtucket, Rhode Island.

Aside from gaming, Milton Bradley was also a publisher. He published pamphlets and tracts on Friedrich Fröbel's kindergarten system. The Milton Bradley Company also produced the Work and Play andKindergarten News (later Kindergarten Review), but none was profitable. Despite business partners redrawing their support for the publishing, Bradley continued with it until his death.

The Milton Bradley Company introduced into the market the first standardized watercolor sets in the 1890s. They also came with educational games likesBradley's Word Builder and Bradley's Sentence Builder. He also introduced crayon packages with standardized colors and educational materials for teaching colors.

Milton Bradley married Vilona Eaton in 1890. The couple had no child with Vilona dying in 1867. Bradley then married Ellen Thayer with whom he had two children. Milton Bradley died at age 74 on May 30, 1911, in Springfield, Massachusetts. He was interred beside his father, mother, and first wife on a family plot in Springfield Cemetery.