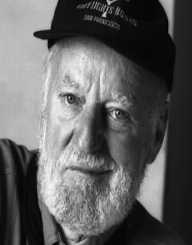 Lawrence Monsanto Ferlinghetti is an American social activist, poet, and painter. Born on March 24, 1919, he is known for the collection of poems titled A Coney Island of the Mind in 1958. The book was very successful selling over one million copies and translated into nine languages. He is the co-founder of City Lights Bestsellers & Publishers. He has published several poems and done many painting works.

Lawrence Ferlinghetti was born on March 24, 1919, in Yonkers, New York. He lost his father before birth and was separated from his mother soon after birth as she was confined to a mental hospital. He graduated from the University of North Carolina in Chapel Hill in 1941 with a B.A. in journalism. He did his graduate studies at the Columbia University after his service in the World War II. In 1947, he graduated with a master’s degree in English literature. His thesis was on John Ruskin and British painter J. M. W Turner. He then traveled to Paris for his Doctorat de l'Université de Paris, with a "mention trèshonourable" at the Sorbonne in 1951.

Lawrence Ferlinghetti started a career as a journalist after college in 1941. He worked as a sports writer for The Daily Tar Hel. In the summer same year, he joined his two friends for lobster fishing and moss gathering from rock, which they sold for pharmaceutical purposes in Portland. It was during this period that he gained interest in things related to the sea making it one of his favorite themes for his poetry.

Lawrence Ferlinghetti enrolled at the midshipmen’s school in Chicago after the Pearl Harbor attack on December 7, 1941. He passed out as a junior officer on J.P Morgan yacht in 1942. His next post was on an Ambrose Lightship outside New York harbor, where he identified all incoming ships. He served as an officer on three US Navy sub chasers used in escorts from 1943 and 1944. He commanded the submarine chaser USS SC1308 during the Normandy invasion. Ferlinghetti later served as a navigator to troop ship USS Selinur. He became a Pacific after a terrifying experience during a visit to Nagasaki, six weeks after the Americans dropped the atomic bomb on the city.

Lawrence Ferlinghetti worked in the mailroom at Time magazine in Manhattan after his war duties before continuing his education in Paris. On his return, he worked as a French tutor in an adult education program, became an art critic and a painter. Peter D. Martin published his first translation works of poems by Jacques Prevert, in the magazine City Lights. Working in collaboration with Martin, they founded City Lights Bookstore in 1953, becoming the first all-paperbound bookshop in the US.

In 1955, Lawrence Ferlinghetti also founded City Lights Publishers the publishing extension of City Lights with his book of poems, Pictures of the Gone World, 1955 the first number of the Pocket Poets Series. Aside from his works, they published works by the likes of Kenneth Patchen, Kenneth Rexroth, Gregory Corso, Robert Duncan and Beat writers among others.

Lawrence Ferlinghetti was of the view that “art should be accessible to all and not a few intellectuals.”He published several works including A Coney Island of the Mind, 1958, Tentative Description of a Dinner Given to Promote the Impeachment of President Eisenhower, 1958, One Thousand Fearful Words for Fidel Castro, 1961, Unfair Arguments with Existence, 1963 and Where is Vietnam? In 1963. Others includeThe Secret Meaning of Things, Open Eye, Open Heart, Over All the Obscene Boundaries, A Buddha in the Woodpile, and Poetry as Insurgent Art among several others.

Aside from writing and publishing of books, Lawrence Ferlinghetti was also a painter for 60 years and a proponent of the New York abstract expressionist. He started painting while in Paris in 1948. On his return to the United States, he worked in a studio at 9 Mission Street on the Embarcadero. He has held exhibitions as a solo artist at the Butler Institute of Arts, Il Palazzo Delle Esposizioni in Rome, Sonoma Valley Museum, and the Marin Museum of Contemporary Art. His works are exhibited in several museums and galleries in the United States. He joined the Honour Committee of the Italian artistic, literary movement IMMAGINE&POESIA in 2009.