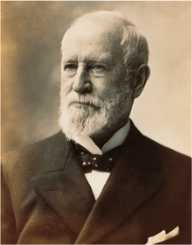 Charles Lewis Tiffany was born on February 12, 1812, in the town of Killingly, Connecticut. His father, Comfort, was the owner of a company that produced cotton goods. His mother’s name was Chloe Draper. He started his education at a district school in Danielsville. He then studied for a few years at an academy in Plainfield.

At the age of fifteen, Tiffany started managing a general store that was owned by his father. He then joined the office of his father’s cotton company. In 1837, he opened up a small shop in New York City with his friend John B. Young. They sold gifts, stationery supplies, and costume jewelry. The business had a rocky start, but it soon managed to take off. By 1839, they also began selling clocks, cutlery, porcelain, and glassware. In 1841, a third partner joined them, changing the name of the company to Tiffany, Young, and Ellis. They began producing their own jewelry, as well as silverware. They imported high-quality gems from countries all over Europe. In 1845, they published their first catalogue. In 1850, they opened up a new branch in Paris.

In 1953, Young and Ellis decided to retire. The business was renamed to Tiffany & Co. The company managed to generate a lot of publicity. Many political leaders and royal family members around the globe wanted to wear Tiffany jewels. During the Civil War, the business began producing swords, medals, and flags. In 1968, another branch was opened in London. In 1887, the company managed to buy and resell some of the French Crown Jewels.

Charles Tiffany helped found the New York Society of Fine Arts. He was also a member of the National Academy of Design and a patron of the Metropolitan Museum of Art.

Charles Tiffany was given the National Order of the Legion of Honor from the country of France. He was also given the Praemia Digno Medal by the Czar of Russia. His company won the grand prize for silverware and the gold medal for jewelry at the Paris Exposition.

Charles Tiffany passed away from pneumonia on February 18, 1902, in the city of Yonkers, New York. He was 90 years old. His body was buried at the Green-Wood Cemetery in Brooklyn.