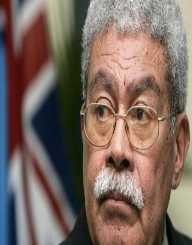 Laisenia Qarase is a Fijian political figure who served as their sixth prime minister between 2000 and 2006. Laisenia Qarase attained his position after joining the Interim military government that had come to power.Qarase first joined them as their financial adviser and was later appointed as the prime minister.

Laisenia Qarase is also the founder of a party named `SDL Party’ which became one of the greatest in the country. During his reign as prime minister, Qarase often enhanced relations with foreign nations and promoted liberalized economic policies. Qarase was re-elected successfully by a parliamentary election but was soon overthrown as a result of a military coup. However, Laisenia Qarase has not stopped advocating for democratic a liberal reforms in Fiji.

Laisenia Qarase was born on 4th February 1941 on Vanua Balavaisland, located in the Lau archipelago in Fiji. Qarase's  father was called Josateki Mate and originated from the Tota clan. Qarase went to school at the Suva Grammar school. Laisenia Qarase later joined `the New Zealand University of Auckland’ where he pursued a degree in commerce.

After graduation, Laisenia Qarase began his career in the banking sector in Fiji. He worked with Fiji Development bank as their managing director from 1983 and worked there for fifteen years. In 1992, Qarase became the director of a government investment company called `Fijian Holdings.’ During his time as the director, Laisenia Qarase formulated a nine-point plan that the government used to provide government assistance to ethnic Fijians. Qarase worked in the position until 1995.

In 1994, Laisenia Qarase was employed as the chair  of `Fiji Television.’ Qarase then worked in this position for four years until 1998, when he was appointed to head `Fiji merchant bank.’ The bank was privately owned

In 1999, Laisenia Qarase was appointed to the Senate, courtesy of Fiji’s great council of chiefs, marking the start of his political career. The following year, there was a military coup that greatly destabilized the government. As a result, Qarase was appointed as the interim prime minister and became the prime minister on 16th March 2001. Laisenia Qarase then formed his political party named `Soqosoqo Davatani lewenivanua’ (SDL).

In 2003, Laisenia Qarase excluded a rival political association from his cabinet. The Supreme Court reviewed the matter, and on 18th July that year, it declared the decision unconstitutional. In 2004, the court authorized that he should award 14 cabinet positions out of 30 to the party. The following year, Qarase’s government was involved in incarceration that involved two Australian tourists because of their homosexual deeds. This lead to condemnation from all over the world. However, Laisenia Qarase staunchly defended his country.

In 2005, Laisenia Qarase was outspoken about poverty issues and identified them as one of the major hindrances for development of banks. More so, Qarase widely criticized income balances during a press conference. During the same year, Qarase attended a meeting at `Commonwealth Parliamentary Association.’ During the meeting, Qarase claimed democracy styles by the western countries were inapplicable in this country since they clashed with many traditions. During the same year, Qarase was widely accused of engaging in corruption activities.

In 2006, general elections were held whereby his party won the elections by a narrow margin hence he retained his seat. However, Laisenia Qarase was removed from power later that year on 4th December by a military coup. The coup was headed by Voreqe Bainimarama, also known as frank. Since the coup, Fiji has not been able to hold any democratic elections. The following year, Qarase took to court and sued the government in relation the Coup. The court ruling led to the lifting of martial law in Fiji.

Laisenia Qarase received the `Star of Melanesia’ by the head of state of Papua New Guinea. This was due to Qarase's efforts in advocating for better conditions by the Melanesian people. More so, he had led to improved commerce through the Pacific region.

Laisenia Qarase got married to a lady named LebaLaveti. The couple was blessed with five children, consisting of three sons and a daughter. One of the sons went to live in the US while the other two relocated to Australia.

Laisenia Qarase is a religious man, specifically a devoted Christian. He has a good friendship with famous Evangelist Benny Hinn. He claims his religious views to be the reason he is against homosexuality.