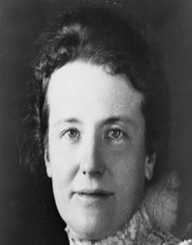 Edith Roosevelt was the First Lady of the United States while her husband was US President Theodore "Teddy" Roosevelt. She was his second wife after the death of his first wife, Alice Lee. Edith Roosevelt established a lot of formal traditions that are still being practiced at the White House.

Born as Edith Kermit Carrow on August 6, 1861, in Norwich, Connecticut to Charles and Gertrude Elizabeth Carrow. She was the eldest of three siblings and had an older brother who died a year before she was born. She grew up right next to Theodore Roosevelt's home in Union Square, New York City.

For her early schooling, she was mentored privately at home alongside her siblings with her father occasionally taking the lead by taking them to countryside trips and new literary teachings. She attended the Louise Cornstock Private School where she excelled in writing and developed a profound love for Shakespeare.

During her younger years, she was fondly called as "Edie" by those around her.  Before her marriage to the future US president, the two had already established relations as childhood friends with Roosevelt's younger sister Corinne as her best friend. Edie and the young Roosevelt had their share of romance but burned out when Roosevelt moved to pursue his studies at Harvard University. It was at Harvard where Roosevelt met his first wife Alice Lee and married her in 1880, with Edie attending the ceremony.


Edie as Missus Roosevelt and US First Lady

Just four years into their wedding, Alice Lee died from Bright's Disease two days upon giving birth to daughter Alice Lee and leaving Roosevelt as a widower in 1884. Edie and Roosevelt managed to rekindle their romance upon a chance encounter held his sister Corinne's home. She proposed the following year and the couple married in London, England on December 2, 1886. The newly-wed couple spent their honeymoon at Long Island, New York.

Roosevelt's daughter from his first marriage, Alice Lee, was cared for by his sister until the couple decided to take her in and raise her when she was three years old. Edie's biological children with Roosevelt were named Theodore III, Kermit, Ethel, Archibald, and Quentin.

By this time, Roosevelt was already an established persona in the world of politics, and he was placed in the US Civil Service Commission from 1888 to 1895. In 1894, Edith Roosevelt convinced Roosevelt not to run for the presidential elections of which he obliged which resulted in the family staying at Washington DC. They relocated to New York when Roosevelt was named NYC police commissioner in 1895 and moved back when he was appointed as the Navy's assistant secretary. Edie was unable to move immediately to NYC due to her pregnancy, but she followed soon after the birth of their son Kermit.

Edith Roosevelt experienced being the US First Lady for the first time when President William McKinley was assassinated and her husband as the acting US President in 1901.  She made her first move as US First Lady by expanding the White House where she instructed the building of the West Wing to fit their large family.

She also pioneered in the formal events held at the White House as well as serving as the nation's hostess instead of the president. She made history as the first US Lady to hire a secretary to assist her in her works. Isabelle "Belle" Garner served Edie during her term as First Lady wherein her first work assignment was to organize her daughter Alice's debut in 1902.

Despite being busy as First Lady, Edith Roosevelt also dedicated her time to her children by attending to them and actively participated in their education by teaching them personally. In her life, she suffered two miscarriages and longed for more children.

She was also a very private person and led her personal family life exclusively. Edie burned all the letters she shared with Roosevelt before she died, save for a few who survived and is stored at the Houghton Library.

Edith Roosevelt died on September 30, 1948, in Sagamore Hill at the age of 87 where she was buried at Youngs Memorial Cemetery in Oyster Bay, New York right next to her husband.