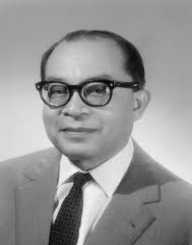 Hatta was eight months old when his father died. Hatta's mother came from a wealthy family, and they raised Hatta and his six sisters.

He studied at a Malay school and then went to a Dutch language school from 1913 to 1916. Hatta passed the exam, which allowed him to enter a Dutch secondary school. His mother asked him not to go to the school in Batavia, as he was too young. Batavia was some distance away, and his mother felt he was too young to be on his own. Due to this, Hatta did his secondary schooling at Meer Uitgebreid Lager Onderwijs (MULO).

Mohammed Hatta worked part-time at the post office. This wasn't allowed for MULO students under normal circumstances. Due to Hatta passing his exam for the Dutch school, however, he was allowed to work.

In 1918, he became Treasurer for the local branch of the Youth Association of Sumatra.

In 1919, Mohammed Hatta enrolled in the Dutch secondary school in Batavia. He graduated in 1921, and he did further study at the Rotterdam School of Commerce in the Netherlands.

Hatta graduated in 1932 with a degree in economics. He continued and completed all requirements for his doctorate, but due to politics, Hatta didn't graduate.

While he was in the Netherlands, Mohammed Hatta joined the Indies' Association. The organization underwent two name changes to become Perhimpoenan Indonesia. Hatta served as Treasurer from 1922 to 1925.

He became Chairman in 1926 and served in the role until 1930. Hatta supported Indonesia becoming an independent nation through non-support of the Dutch Colonial Government.

Hatta began to attend conferences all through Europe to gain support for his cause. He attended several high-profile gatherings in early 1927. As a result, the Dutch authorities conducted a raid on the homes of Perhimpoenan Indonesia's leaders.

The authorities imprisoned five leaders, including Hatta, and put them in prison for six months. The authorities then took them to Hague to go on trial. Hatta spoke at the hearing about Indonesia wanting independence.

The Dutch released Mohammed Hatta and the other leaders from prison in 1929. He then returned to Indonesia in 1932.

Indonesia had a political party called the Indonesia Party (Partindo) or PNI. Sukarno ran the Party, although the Dutch authorities jailed him.

Members from the PNI joined together and founded the New PNI. The Party became the Indonesian National Education. Upon his return to Indonesia in 1932, Mohammed Hatta became Chairman of the New PNI.

After his release from prison in 1932, Sukarno returned to his old Party, Partindo.

In early 1934, the Dutch government jailed Mohammed Hatta and other leaders of the New PNI. As a result, in 1935, the government exiled them to Papua. Hatta wrote newspaper articles during this period, which earned him enough to live on and also assist his colleagues who struggled financially.

The Dutch authorities transferred Hatta and Syahrir, one of his colleagues, to Maluku in 1936. They began to teach history and politics to the local children. Hatta adopted Des Alwi during this period, who would go on to become a well-known Indonesian diplomat and historian.

In 1942, Mohammed Hatta and Syahrir transferred to West Java.

World War II and the Japanese

The Japanese offered Hatta a position of Advisor in the occupied government. Hatta accepted the post, and the Japanese assured him that Japan had no intention of colonizing Indonesia.

Sukarno met with Hatta and Syahrir in July 1942. They decided Syahrir would secretly begin organizing a revolutionary resistance while Hatta and Sukarno worked in the occupied government.

As the war came to an end, Japan started losing its power and authority. They agreed Indonesia could have its independence under their supervision. That was the only encouragement Mohammed Hatta and his men needed, and their work gathered momentum.

Japan granted independence to Indonesia in August 1945. Mohammed Hatta and Sukarno traveled to Saigon to receive the news.

They returned to Indonesia on 14th August. Meanwhile, the United States had dropped atomic bombs on Hiroshima and Nagasaki. The Japanese surrendered to the Allies on 15th August. This meant there was no Japanese supervision of the declaration of independence for Indonesia.

On 17th August 1945, Hatta and Sukarno proclaimed Independence for Indonesia.

Vice Presidency and other Positions

Sukarno became the President of Indonesia, and Mohammed Hatta became the first Vice President. With Sukarno away during the early period, Hatta made several important decisions. This included the Prime Minister becoming the Head of Government instead of the President.

In 1946, the Dutch started sending troops back to Indonesia. Hatta, Sukarno, and Syahrir (now Prime Minister) worked out an agreement which they thought would be acceptable.

Over the next three years, the Indonesians and the Dutch disagreed on the terms of the agreement. Hatta took on additional cabinet positions during this period. These included Prime Minister (1948-1949), Minister of Defence (1948-1949), and Foreign Minister (1949-1950).

A delegation traveled to the Hague in August 1949 for discussions. On 27th December 1949, the Dutch recognized the independence of Indonesia.

Mohammed Hatta remained an active member of the government and oversaw the setting up of Indonesia's foreign policy.

In December 1956, Hatta resigned from his position of Vice President.

Over the years, Hatta published three books. These included Colonialism and the Danger of War (1961), and One Indonesian View of the Malaysia Issue (1965).

Among his awards and honors, Mohammed Hatta has the following:

In 1945, Mohammed Hatta married Rahmi Rachim. The couple had three children, as well as their adopted son, Des Alwi.