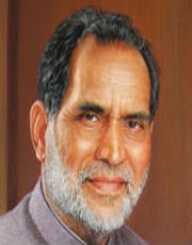 Chandra Shekhar was an Indian Politician and 8th prime minister of India born in 1927 and died in 2007. He became prime minister in 1990 and held the seat briefly until June 1991. During 19191 He would later hand over the position to P. V. Narasimha Rao. Thereafter, his fame in politics gradually declined.

However, for many years he continued holding his position in Lok Sabha. From 1977 till 1988, he led the Janata Party. Chandra’s interest in politics began when he was a student, attaining the name “firebrand.”  He later graduated from Allahabad University after studying political science. Afterward, he became a Socialist Movement member.

Chandra Shekhar was born on July 1, 1927, in Ibrahimpatti in India to a poor farming family. However, that did not prevent the bright Chandra from getting an education. He joined Satish Chandra P.G. College where he graduated with a degree in Bachelor of Arts.

Afterward, he studied political science at Allahabad University and in 1950 was awarded his Master’s degree. During his time as a student, he was actively involved in student politics and was nicknamed “firebrand.”

After graduating from Allahabad University, Chandra became a member of the socialist movement. Later, he became the secretary of PSP, the Praja Socialist Party. From 1956 to 1956, he became the party’s general secretary of the Uttar Pradesh state unit.

In 1962, Chandra became a parliamentarian.  Onwards till 1977, he became a member of the Parliament of India’s upper house (Rajya Sabha). He was later arrested in Patiala jail.

In 1990, Chandra Shekhar became prime minister, a position he held for only seven months. During that time, he was also responsible for Home Affairs and Defence. When Congress chose not to support a full budget, Chandra chose to resign as prime minister. The position was taken over by P. V. Narasimha Rao. However, he did not give up his seat at Lok Sabha.

Chandra Shekhar was married to Duja Devi. Together they had two sons, Neeraj and Pankaj. His diary which he authored while in prison was published as Meri Jail Diary.

Chandra Shekhar died at the age of 80 on July 8, 2007, in his place of birth Ibrahimpatti, India. The politician succumbed to multiple myeloma which had bothered him for a while. His two sons survived him.