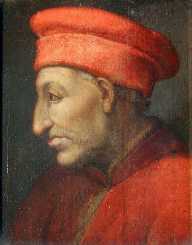 Cosimo de' Medici was born September 27th, 1389. Cosimo, an Italian politician, and banker also referred to as "the Elder" hailed as the first member of Medici dynasty. His family ruled Florence for most of the Italian Renaissance. He derived his influence and power from his wealth and was an eminent patron of arts and architecture.

Cosimo de' Medici was born September 27th, 1389. He was the son to Giovanni di Bicci de' Medici and Piccarda Bueri. During this time, it was common practice to include a father's name to that of their child.

He inherited his wealth and competence in banking from his father who was initially a moneylender. After two decades of operation, the family's bank had opened various branches across Italy including Geneva, Rome, and Venice.

His influence and efforts later helped the Medici bank expand and open offices throughout western Europe. His father's engagement with John XXIII saw the bank announced as the head of all papal finances, gifting the family with immense power.

John XXIII downgrade made the family's bank monopoly to end. This compelled Giovanni to leave the leadership of the Medici bank to his two sons.

Cosimo de' Medici's political influence and power over Florence became stronger because of his wealth. Although he claimed not to hold any political desires, he occasionally swayed voters with his wealth, most notably, the Signoria of Florence.

In 1433, Cosimo went into exile after being jailed for failure to conquer the Republic of Lucca, took his bank along with him and settled in Venice. He returned after a year when his banishment had to be lifted.

His return instituted many changes made to the constitution and once again secured his power. He strove to bring peace to Northern Italy through foreign policy, with the aim of creating a balance of power between Milan, Florence, Naples, and Venice.

Cosimo de' Medici married Contessina de' Bardi, and together they had two sons, Piero the Gouty and Giovanni de' Medici. He also had a son born out wedlock, Carlo who later became a prelate.

Cosimo de' Medici died on August 1, 1464, and upon his death, granted the title Pater Patriae "Father of his Country." His son Piero succeeded him.