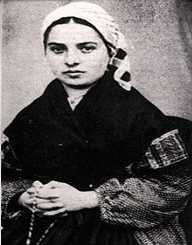 St. Bernadette? is a Roman Catholic saint who saw visions that led to the creation of the Catholic shrine in Lourdes in France.

St. Bernadette was born as Marie Bernarde Soubirous on January 7, 1844, in Lourdes, France. She was the eldest child of the nine siblings born to Francois and Louise Soubirous. She was baptized two days after her birth. She grew up in poor conditions. Her father was a miller, while her mother washed clothes for people. Bernadette had health issues since her childhood. She suffered constant asthma attacks from her toddling years to her adulthood.

She enrolled at a local Catholic-run school in Nevers. Due to her constant ill health, Bernadette frequently missed school. She started studying the French language in 1857 at the age of 13. Even in her adulthood, she spoke very little French. In her Lourdes region, people spoke the Occitan dialect. This was a Roman dialect spoken across the border regions of Italy, Spain, and France. She was a slow learner in her Catechism class. At the age of 14 years, Bernadette was studying the basics of Catholicism taught to children less than seven years.

Bernadette got her first vision on February 11, 1858. She was aged 14 years. She went out with her sister and friend to fetch firewood near the local grotto. She saw a vision of a young beautiful lady. When she asked the others, they confirmed to have not seen anything. Three days later, Bernadette and her friends returned to the local grotto. Once there, she slipped into a trance. After regaining consciousness, she said that she saw the young lady again. Like before, the rest of the girls did not see anything. On February 18, she saw the lady again in the vision. This time the lady told her to visit the grotto for the next fourteen days.

She religiously returned to the grotto for the fortnight as told. Bernadette defied her parents in going to the grotto. Her parents like many other neighbors thought she was insane. On the seventh visit to the grotto, Bernadette gave a vivid description of her vision. She gave a description fitting any statue of the Virgin Mary in a Catholic church. The opinion was divided within the faithful. While others believed her story, the rest thought she had turned mad.

In one of the visitations, the lady told Bernadette to drink from the water in the grotto. The water was traditionally muddy. When she returned the following day, the mud had cleared and the water flowing was crystal clear. She drank the water, bathed and also ate the instructed herbs in the grotto. According to her, it was an instruction from the vision as a sign of the traditional penance.

The local clergy started a series of interrogations to establish the truth. She was examined severally by the Catholic and the French administration officials. Bernadette stuck to her vision narration to the end. At the end of the questioning, the Catholic clergy believed her narration.

Bernadette became a Catholic celebrity in Lourdes. Uncomfortable with her new publicity, she went to live in a convent. She became a nun on July 29, 1866, of the order of the Carmelite Sisters. She lived at the convent serving the terminally ill at the local hospice. During her free time, she sewed the apparel used to decorate the altar and garments used by the clergy. Despite her admiration from other nuns, Bernadette kept a humble demeanor all through her life.

In 1876, the Basilica of the Immaculate Conception was officially consecrated by the Apostolic Papal representative in Lourdes. Several pilgrims have confirmed being healed after drinking the water from the spring at the shrine. Doctors in Lourdes have confirmed some of the healings that defied conventional science.

Other churches have been built over the years bringing a huge number of worshipping sites in and around Lourdes. The site is today both a religious pilgrimage site and a tourist destination.

Bernadette continued to brave her ill health while at the convent. She spent most of her time in deep prayers and penance. She died on April 16, 1879. On her death bed, Bernadette cried out for the Blessed Virgin to pray for her forgiveness. She was buried at the Saint Gildard Convent in Nevers.

She was canonized into sainthood by Pope Pius IX on December 8, 1933. After several exhumations, her body is said to have defied decomposition. The Catholic faithful hail this as a divine blessing on the saint.

In modern history, filmmakers have produced numerous film adaptations of the life and mysterious afterlife conditions of the body of Saint Bernadette of Lourdes.