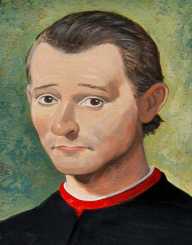 Niccolo Machiavelli was an Italian writer, satirist, and political theorist; he is best known for his book The Prince.

Thanks in part to his family’s high standing Machiavelli received a formal education, beginning at age seven. He studied Latin as well as grammar and rhetoric. Italy at the time was fractured into some city-states who all vied for power. Matters were even more complicated as the papacy, and great European powers were also involved in the Italian power struggles. These tremendous political machinations would shape Machiavelli’s writing.

Florence had been under the control of the Medici banking family for sixty years when they were ejected by the supporters of the radical friar Girolamo Savonarola in 1494. Savonarola came to power in the face of the French invasion of Italy. Savonarola quickly fell afoul of the papacy and was overthrown, and a republican government was installed. Niccolo Machiavelli was appointed to the chancery of the new Florentine republic. Here he produced official government documents.

Machiavelli also served as the secretary of the Dieci di Libertá e Pace and in this position dealt with the city’s diplomacy. As part of his diplomatic role, Machiavelli often visited foreign courts such as the royal courts of Spain and France. Machiavelli also had many dealings with Pope Alexander IV.

At this time the papacy was controlled by the Borgia family who used the Papal States influence to carve out a Papal kingdom in central Italy. Machiavelli was also involved in military and defensive matters in Florence. He was tasked with managing the militia from 1502 to 1506. Niccolo Machiavelli favoured using citizen-soldiers over mercenaries and condottieri.

Machiavelli’s time in power came to an end in 1512. The Medici family, backed by the papacy and the Spanish regained control in Florence and purged the old government. Machiavelli was arrested by the Medici and tortured. Upon his release, Machiavelli retired to the countryside and devoted the rest of his life to his writings and socialising with the political classes of Florence.

Niccolo Machiavelli wrote plays and treatises during his career. Machiavelli was writing at the time of the Italian Renaissance, and Greek and Roman literature profoundly influenced his writings as such. This is seen in some of his poetry and plays.The Golden Ass, a poem by Machiavelli, was based on the work of classic poet Apuleius. The Girl from Andros, a play, was an adaption of an earlier work by the Roman Terrance.

Machiavelli’s plays and poetry were well known in Italy during his lifetime and much better received than his philosophy and treatises. However, it is his other work which is best known today. The Prince is Machiavelli’s most noted work, and it focuses on a series of maxims for a new autocratic ruler, prince, should follow to retain power. These maxims focussed on the prince recognising the difference between public morality and private morality. The book’s advocating of using force when necessary has led to the phrase ‘the ends justify the means,’ wrongly being attributed to Niccolo Machiavelli.

The term Machiavellian came to mean a person willing to use any means necessary to attain power. The Catholic Church banned the book during Machiavelli’s lifetime. Napoleon Bonaparte well regarded it. The widespread understanding of Machiavelli and The Prince are entirely unrepresentative of the man and his work. Machiavelli was a lifelong Republican, and The Prince repeatedly states that republican government is superior to autocracy. Many have come to believe that The Prince is entirely a work of satire. Machiavelli drew inspiration for The Prince mainly from Caesar Borgia, the son of Alexander IV.

Many see Machiavelli’s Discourses on Livy as portray his actual political views. The book is much longer than The Prince and offers a guide on the running of a free republic. The book studies the early Roman republic but strays into more contemporary examples. Discourses outline how republican governments are superior to the autocratic rule of princes.

Debate exists over the importance of the work as a military guide. Many dismiss it as it did not account for the prevalence gunpowder would gain across battlefields. However, others argue the citizen army did come to dominate warfare, albeit centuries after Machiavelli. Like his fictional work, Niccolo Machiavelli was heavily influenced by classical works in his political works.

It is recognised that Machiavelli drew on inspiration from Epicurus, Xenophon, and Thucydides in his works. Machiavelli’s philosophy did mark the one noted break with classical thought, and that was his support for realism over utopianism and idealism. Machiavelli is seen as being one of the first proponents of realpolitik and modern philosophy.

Niccolo Machiavelli married Marietta Corsini in 1502, and together they had six children. Machiavelli died on 21 June 1527 in Florence. He was interred in the Church of Santa Croce and his resting place is marked by a cenotaph bearing the inscription, ‘No eulogy (would be) a match for such a great name.’ The majority of his works were published in the decade following his death.